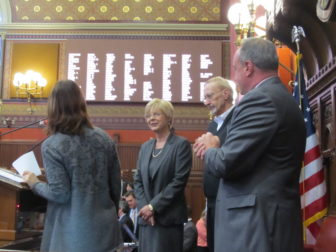 Tami Zawistowski, the Republican winner of a special election last week, took the oath of office Wednesday as a member of the state House of Representatives, giving the GOP minority its biggest caucus in 10 years.

The Democratic advantage in the House is 96 to 54, with one vacancy in a New Haven district that is likely to be won by a Democrat. Republicans have now gained 17 seats in four years. As recently as the 2010 session, the GOP was outnumbered, 114 to 37.

Zawistowski, 57, of East Granby, captured the 61st House District seat vacated as a result of the death of two-term Rep. Elaine O’Brien, D-Suffield. It was the second Democratic seat won in a special election in less than a year: Sam Belsito of Tolland won the 53rd House seat in June.

She is a dealer of rare books and a former bank executive.

Zawistowski, who intends to a seek a full two-year term this fall, joins the session exactly three weeks before its constitutional adjournment May 7. The economy is her main priority, she said.

“I’m ready to go,” Zawistowski said after taking the oath. “You can definitely keep up on things.”

Her husband, Ed Zawistowski, accompanied her Wednesday. House Minority Leader Lawrence F. Cafero Jr., R-Norwalk, stumbled over her name introducing her. He smiled and said, “We call her Tami Z.”

Let the record show: Her first vote was to pass a bill requiring the state to provide Medicaid coverage for telemonitoring services of patients at their homes under certain conditions.