Op-ed: Is urban parking the symptom or the disease?

A recent set of studies from the University of Connecticut aptly describes the ills of urban parking and how it affects the landscape of downtown Hartford. Surface parking now covers 22 percent of the land in downtown Hartford, and “entire blocks have been turned from human-scale building fronts to expansive surface lots.”

Why does Hartford have so much urban parking? Is urban parking the symptom or the disease? The recent Metro Hartford Progress Points report gives us a holistic view of Greater Hartford – how we work, live and learn as a region – a view we need in order to understand the root causes of issues like urban parking.

Why does Hartford have so much parking?

Progress Points shows the enormous volume of commuters coming into Hartford – the population of the city almost doubles each day because of them. 83 percent of the more than 120,000 jobs in the city are filled by commuters. 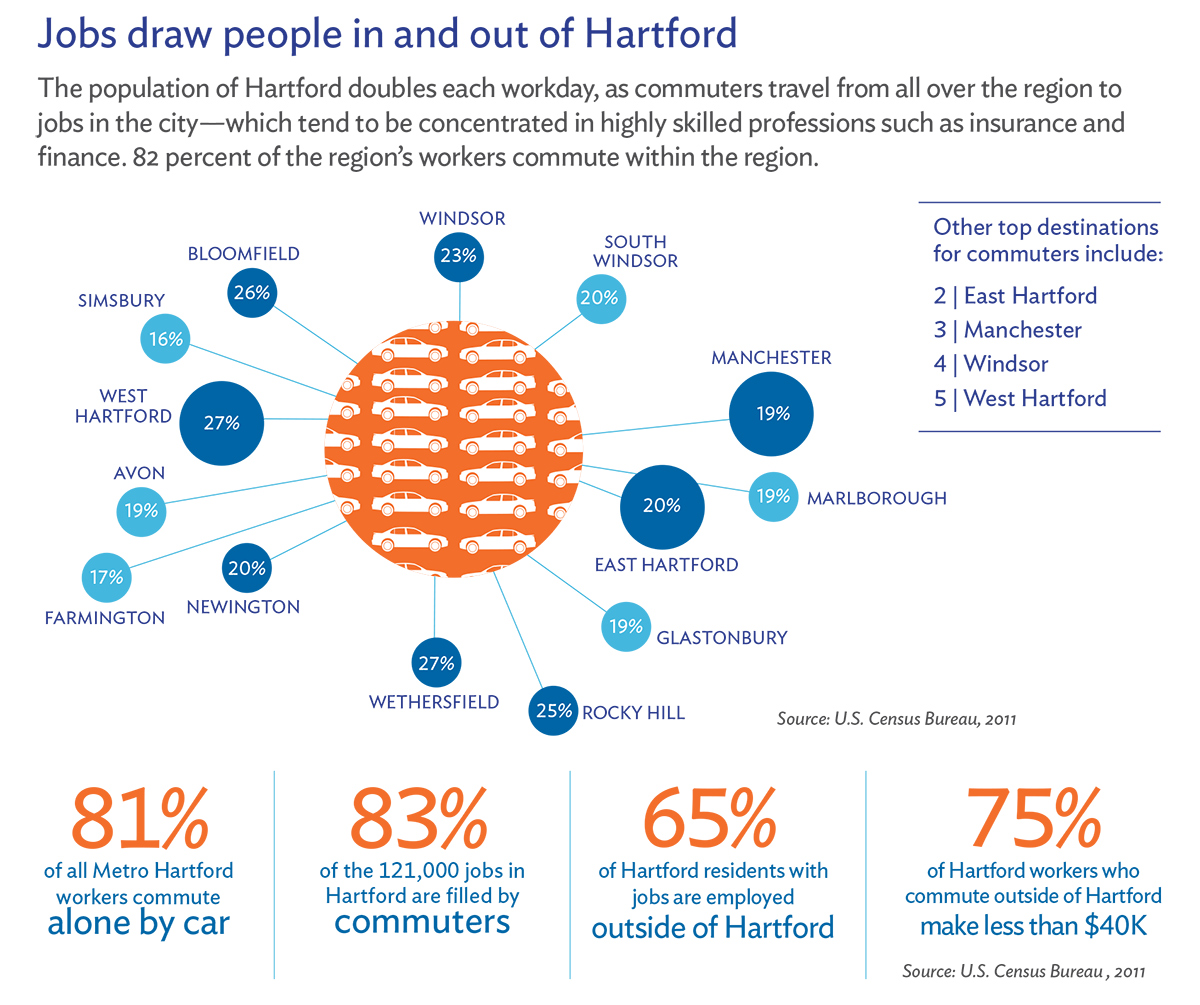 Data from U.S. Census Bureau On The Map application, 2011 data for all jobs

Parking in Hartford exists to accommodate these commuters. Cities – especially struggling cities – are pressured to hold on to jobs and visitors. That’s why few cities increase parking prices or tax employers for parking. If Hartford were to raise the cost of parking, what would stop employers from bargain hunting for more business-friendly parking outside the city?

The UConn study compared the evolution of parking in six towns: Hartford, New Haven, Cambridge, Mass., Lowell, Mass., Arlington, Va., and Berkeley, Cal. What do these towns have in common?

While Hartford has a higher rate of commuters than the other towns in the study (and other cities in Connecticut), it is at least in the same range as Arlington and Berkeley.

However, Arlington, Berkeley and Cambridge are each close to a larger city and served by that region’s mass transit system. We know from Progress Points that 81 percent of all Metro Hartford workers commute to work alone by car. If we look at the average number of public transit trips per year for residents of the region around the city, Hartford starts to look different than the other towns.

Hartford does have some peer cities in this respect. Many capital cities are squeezed in the same way. Since they host state agencies and government jobs, they are also home to a lot of parking. Albany, Trenton and Harrisburg all exhibit the same pattern as Hartford: high rates of people commuting to jobs from outside the city and low usage of public transportation in the surrounding region.

Other side of the coin

But this is not the whole story. Progress Points also gives us a chance to look at the ‘reverse commute’ – those who live in the city and commute outside for work. Two-thirds of Hartford residents work outside the city, with 75 percent of those commuting to jobs that pay less than $40,000 per year. The same pattern is shared by several capital cities; jobs in the city are not held by people who live in the city.

Parking is rarely an issue for those working in the suburbs. But public transportation is. A lack of viable transportation alternatives makes everyday life harder for Hartford residents who commute out to the suburbs. Hartford sends workers out throughout the state, within the region to West Hartford, to East Hartford, to Farmington, to Manchester, but many travel even farther. Virtually all travel by car.

Reducing parking in the city would provide little direct benefit for working families like these. But better options for public transportation would, and it would also create the conditions to allow for reduced parking.

So, if we want less parking in Hartford, what should we do?

Any solutions to the problem of urban parking need to take a holistic view of regional transit and address the root causes, not the symptoms, of surface parking. The Progress Points framework provides an opportunity for us to take this holistic look as a region.

Make it easier for everyone to get to work without using a car: We can’t relocate Hartford to use another city’s transportation system. But we can improve the transportation options near Hartford. The best way to do this is through public transportation. Increased rail travel, leveraging the CTFastrak between Hartford and New Britain, or extending FastTrak east to Buckland Hills and Manchester would help commuters to and from Hartford. Alternatives like bike lanes, rideshare incentives and other tools can also play a role.

Make it easier for everyone to live near where they work: More diverse housing options, better schools and improved public safety could see more workers living in or close to jobs in Hartford. At the same time, we can create opportunities for housing outside of Hartford for those making the ‘reverse commute.’

Progress Points shows that affordable housing options outside of Hartford are limited and that there has been little to no population growth in the towns surrounding Hartford since the 1970s. Increased density near Hartford will help keep this region vibrant and will reduce the impact on our existing transit infrastructure.

Great amounts of surface parking downtown need to be addressed by treating the disease, not just the symptoms, carefully so that the cure does not stimulate further job flight from the city and gives convenient and environmentally friendly alternatives to driving alone.