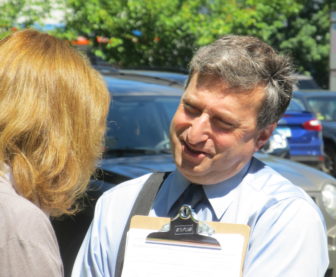 According to Secretary of the State Denise W. Merrill’s office, Pelto had obtained 4,318 of the 7,500 signatures of certified voters he needed to submit by the Aug. 6 deadline.

Pelto, who has been one of the most vocal critics of Gov. Dannel P. Malloy’s policies on education and fiscal matters, told The Mirror last week that he expected his petition effort would fall short.

Friday, the former legislator from Mansfield apologized to his supporters. But in a joint statement with his running mate, Hartford teacher Ebony Murphy, Pelto also expressed hope that their bid had refocused the gubernatorial debate on crucial issues too often ignored.

“We are, of course, deeply disappointed that we were unable to collect a sufficient number of signatures to qualify as third-party candidates for governor and lieutenant governor,” Pelto and Murphy wrote. “While we failed to achieve that critical goal, we’re hopeful that our effort has and will continue to spur a more serious discussion about the critically important issues facing Connecticut.”

Pelto added that “I apologize to all of our supporters for our inability to get onto the ballot, but want to assure them and the citizens of Connecticut that we will continue to stand up and speak out about the problems facing our state and our society and the solutions that will be necessary to ensure a better future of our of our state’s residents.”

Pelto said last week that he believes that local officials responsible for checking the signatures had invalidated hundreds of signatures, some improperly and some for cause. But he also said that even if they had been allowed, he still would have fallen short.

“The petitioning process was an eye opening one,” he said Friday. “While requiring candidates to collect 7,500 signatures to qualify for a position on the gubernatorial ballot continues to seem like a reasonable number, the primitive and burdensome laws and archaic system clearly serves as an unfair barrier to those who believe our democratic system would be better served if voters had more choices when they go to vote.”

Pelto also congratulated former West Hartford Town Councilman Joe Visconti, who petitioned onto the ballot. Visconti and his supporters “did a remarkable job collecting the signatures necessary to get on the ballot,” Pelto said. “Joe has shown that the people can challenge the incumbency parties and shake up the establishment.  I wish him continued success as he speaks out on the issues he is so passionate about.”