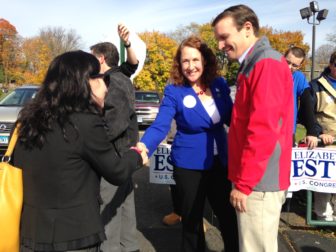 Waterbury – First-term U.S. Rep. Elizabeth Esty won re-election in the state’s most competitive congressional district Tuesday, fending off a challenge from Republican Mark Greenberg in an election year considered to be tough for Democrats.

The 5th District, which includes Danbury, Waterbury and New Britain as well as rural Litchfield County and parts of the Farmington Valley, was considered the GOP’s best shot at gaining a Congressional seat in Connecticut. Esty is the lone freshman in the state’s delegation, and this year’s political climate has had Democrats on the defensive nationwide.

But Esty’s victory over the Litchfield businessman means she’s cleared what has traditionally been the toughest hurdle for members of congress, the first re-election campaign.

Cheers erupted at Esty’s campaign party at Coco Key Water Resort as word spread that Greenberg had called to concede.

She thanked her family and supporters, telling them that it was a tough year, and that the campaign started deeply in the hole, probably more than they’d ever know. She spoke of standing up to the NRA, a reference to her push for gun control after the Newtown elementary school shooting. She praised Greenberg as someone deeply committed to the country.

“We are facing an unbelievably challenging time in the world, and we need to do better, and we can only do better when we work together,” she said.

“I can’t wait to get back to work,” Esty added.

Calling the campaign a “great, great journey,” Greenberg announced his loss to supporters and press gathered at the Palace Theater in Waterbury.

“As of this moment, we have 49.15 percent,” he said. “Very close race, very close race. However, we don’t have the capability of making it up.”

Greenberg has run for Congress three times, but said he will not run again. He said he is content with the outcome and wished Esty the best.

“I’ve always said that this was a win-win situation for me,” he said. “If I won, I’d do a great job in Washington; if I lost, I’d have my family and my children, whom are the dearest to me, and the reason, frankly, that I did this.”

As it did in 2012, Esty’s victory appeared to come largely from the cities in the district.

Greenberg appeared to be winning in Litchfield County, Esty spokeswoman Laura Maloney said shortly before 9:30 p.m., but by a lower margin than the 2012 Republican nominee, Andrew Roraback, had. Roraback, a popular state senator, was later named a superior court judge by Gov. Dannel P. Malloy, in a move seen as benefitting Esty.

The Esty campaign was more optimistic after vote tallies from Waterbury and Meriden came in.

And Esty’s campaign claimed victory in Newtown, a town she lost by 1,500 votes in 2012. Maloney said Esty won the town by about 200 votes.

Both campaigns cited strong turnout Tuesday. But given the district’s high makeup of unaffiliated voters, it was hard to tell what that would mean for the race.

Greenberg’s campaign had been buoyed by promising turnout in Republican-leaning towns throughout the day. At the Southbury Volunteer Firemen’s Association, nearly 39 percent of registered voters had shown up by 1 p.m.

“Most of these people have indicated support for me,” Greenberg said.

Greenberg said many voters seemed to like his messages of change, getting rid of career politicians, term limits and working to create jobs. He said he wouldn’t change anything about his effort to win the seat. “We’ve run a clean campaign. We’ve stayed on issues,” he said outside the Southbury fire station Tuesday afternoon. 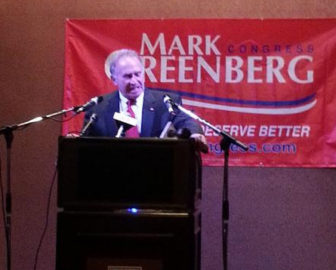 Still, Greenberg noted that his campaign had to spend time and resources addressing what he called “lies” from the Esty campaign about him, particularly an ad that suggested he supported ending “Social Security’s guarantee.” The Hartford Courant rated the ad as false.

Esty, too, cited high turnout Tuesday, particularly in Newtown. On Tuesday, she wore a button for Sandy Hook Promise, a group formed after the school shooting.

Shortly after voting at Cheshire High School in the late morning, Esty said she had been pleased by her campaign’s get-out-the-vote effort and the conversations she’d had with voters. But she said, in the end, her success likely hinged on something else.

“The most important thing if you’re seeking re-election is to do your job in office really well,” she said. “I don’t think I could’ve worked any harder.”

What worked, what didn’t

In Washington, Esty has focused on issues including manufacturing, veterans’ affairs, transportation and gun control. On the campaign trail, she sought to be recognized as a pragmatist with a strong record on constituent services. And she tried to portray Greenberg as too extreme for the district, emphasizing his support from members of the tea party and his positions against same-sex marriage and abortion.

Greenberg, meanwhile, attempted to tie Esty to the president and problems that have occurred on his watch, including the VA scandal, terrorism in the Middle East, and the Ebola virus outbreak. “The last two years in Washington have been a failure, yet Elizabeth Esty has stood by President Obama’s failed agenda,” one of his campaign ads said.

Esty’s previous political experience includes serving on the Cheshire town council and one term in the state House.

When she first ran for the seat in 2012, Esty was considered a longshot to even win the primary against then-House Speaker Christopher Donovan. Esty won the nomination after Donovan’s campaign got caught up in a campaign finance scandal, but she still faced skepticism from some Democrats who viewed her as too moderate. She won a tight race against Roraback.

The GOP selected Greenberg this year on his third bid for the seat. His first two attempts, in 2010 and 2012, ended in Republican primary defeats.

Greenberg has never held elected office and has sought to portray himself as a political outsider with business credentials. The Litchfield entrepreneur started a telecommunications company and now owns a major real estate company that manages properties in Connecticut and New York City. He and his wife also founded an animal rescue organization, The Simon Foundation, that runs a 36,000-square-foot shelter for cats and dogs in Bloomfield.

He told The Mirror in 2011 that he decided to get involved in politics after seeing his business and his tenants’ business struggle after the 2008 recession hit.