Christopher G. Donovan, the former speaker of the state House of Representatives, has been hired by the state’s largest teachers’ union — the second former legislative leader to land a job at the Connecticut Education Association this winter.

Mark Waxenberg, the executive director of the union, said during an interview that Donovan’s background as an organizer for the community college union made him an attractive candidate. The union declined to say how much Donovan would be paid.

Donovan will begin his new job as a field representative in January, and will probably represent the nearly 1,500 teachers working in Milford, Stratford and Trumbull public schools. A committee of 12 teachers from across the state were responsible for interviewing and recommending a candidate to the CEA board.

Donovan — the house speaker from January 2009 to January 2013 — left the General Assembly after 20 years in office to run for congress in Connecticut’s 5th district. His campaign crashed after federal authorities indicted two of his highest-ranking campaign officials, among others, on charges that they conspired to hide contributions from businesses hoping to derail legislation.

Donovan has arguably been labor’s staunchest ally during his time in the legislature.

“He really was an advocate for teachers and had an open door policy,” said Waxenberg. “He was not always 100 percent in our corner…He was a political realist. He would say I agree with you, but he would be very honest with you” about whether something is achievable.

Donovan, who lives in Meriden, graduated from Villanova University with a bachelor’s degree in biology and has a master’s in social work from the University of Connecticut. He has also taught political science classes at the University of Hartford.

Donovan is the second former state leader the CEA has hired recently. The CEA has 75 full-time employees.

Donald E. Williams Jr., the outgoing Democratic leader of the Connecticut Senate, also landed a job at the state’s largest teachers’ union and will start in January. His job title is deputy director of professional policy, practice, research, and reform.

Waxenberg said the former leaders’ qualifications, not their former title in the General Assembly, is what earned them the jobs.

“We don’t really place any extended value on a person because they served in public office. We look at what they are able to do relative to their history,” he said. 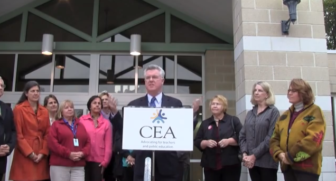 Christopher Donovan accepts the endorsement of the CEA during his run for Congress in 2011.

“It’s more of who shows up at the door and what are their qualifications, and we go from there,” he said.

During his time in the legislature, Donovan was a leading proponent of a health-care pooling bill that passed in 2009, only to be vetoed by Republican Gov. M. Jodi Rell. He also backed minimum-wage increases and requiring private companies to provide paid sick days.