How does your community fare in Malloy’s budget? 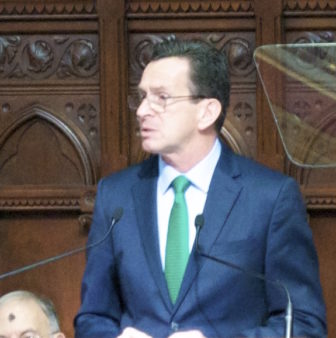 When you’re under pressure to close a shortfall of more than $1 billion in an annual budget of nearly $20 billion, state aid to cities and towns can be a tempting target. It’s a $3 billion pot of money.

The governors of New Jersey and New York cut municipal aid deeply when faced with their own budget gaps, “downstreaming the deficit” in the words of a broker who follows municipal finance. But Gov. Dannel P. Malloy, who was the mayor of Stamford for 14 years before winning the first of two terms as governor in 2010, has resisted dipping into that pot to shrink shortfalls in 2011 and again this year.

His rationale: Cutting state aid only passes on a fiscal problem, leaving local communities with a choice of raising property taxes, cutting local jobs and services, or a mixture of both.

His budget does impose a greater burden on some communities. Rural towns that rely on resident state troopers will have to pay the full cost of the troopers, beginning July 1. And the remaining communities without full-day kindergarten would have to upgrade their programs.

“This budget continues to fund municipal aid so that we can hold down local property taxes, and so that no teacher, no policeman, and no fireman will be laid off because state government failed to do its part,” Malloy said in his budget speech.

Municipal aid comes through various grant programs. About two-thirds of state aid is paid through the Education Cost Sharing program.

Below are three charts: One shows grants through ECS; another shows PILOT grants, the payments the state makes to partly reimburse municipalities for tax-exempt property; and finally, there is a tally of all statutory formula grants for  each municipality, as well as school districts and borough governments within towns, that get aid.