Malloy uses ‘F word’ (not that one) at transportation rally 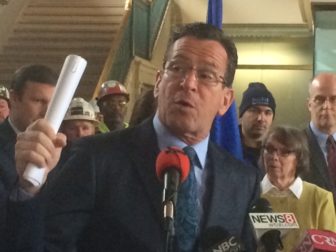 Gov. Dannel P. Malloy, who sees a need for $100 billion in transportation spending in Connecticut over 30 years, danced Thursday on the question of whether Connecticut U.S. Sen. Chris Murphy is right to seek the first federal gasoline tax increase since 1993 to fund infrastructure projects.

“What I’m advocating is exactly what Sen. Murphy is advocating in the sense that we need a dependable source to fund the federal side of transportation expenditures,” Malloy said.

Fine, Malloy was asked, but what about the T-word?

At the time, Murphy stood a few steps away at a “transportation rally” in Union Station in Hartford as reporters pressed the governor on whether he supported the call from the state’s junior senator increase federal fuel tax, which now is 18.4 cents per gallon on gasoline and 24.4 cents on diesel.

“The T word, meaning transportation?” Malloy asked. That generated titters from his audience of transportation advocates and construction workers.

“We need a funding source, so I’m going to use the F word,” Malloy said, barely suppressing a smile.

The exchange was playful, but it placed the Democratic governor in a similar posture to some of the Republicans he regularly mocks for declining to say how they will pay for spending cuts they wish to restore to his proposed budget.

Malloy recently initiated a study to recommend revenue sources for his long-term infrastructure spending plan, potentially setting the stage for a special session this fall during which the governor would have to choose from a funding menu likely to include tolls and fuel taxes.

The governor said a higher federal gas tax, if that is what Congress deems necessary to meet its transportation commitments, would not complicate a debate in Connecticut over state transportation funding.

“I wouldn’t call that a complication,” Malloy said. “I would call it they’re doing their job, and we’re doing our job.”

The rally, attended by Murphy; U.S. Rep. Elizabeth Esty, D-5th District; other transportation advocates; and construction workers was one of 300 held across the nation to urge Congress to close the gap between the $38 billion that the federal gasoline tax produces and the $53 billion spent by the federal government on transportation.

Murphy said the question of how to deal with the federal gas tax was for Congress, not Malloy. The governor agreed.

“I don’t get a vote on whether the Senate or the House are going to increase the gas tax,” Malloy said. “What I do know is they have to do something, otherwise transportation in America, our infrastructure as we know it, is going to crumble. And that’s what’s happening in every state across the nation.”

Malloy suggested an increase was politically defensible, especially in Connecticut, a state that on average receives 1.6 cents in federal transportation funding for every penny in federal gas taxes.