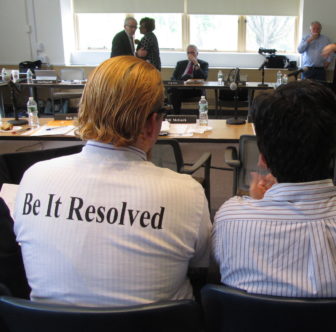 CSCU faculty, in the foreground, wait for Thursday’s Board of Regents meeting to begin.

“Accept it and move on.”

That was the advice the chairman of the Board of Regents had for faculty from the state’s community colleges and regional Connecticut state universities who traveled to Hartford Thursday to share their discontent with the system’s president and his reform plans.

“It is what it is. We are where we are. We are who we are,” Chairman Nicholas Donofrio told a packed room of faculty at the board’s monthly meeting. “Get off the island. Learn to rely on others. Learn to depend on and trust others…It is very good counsel for all of us.”

Over the last several weeks, faculty at 11 of the 17 colleges and universities in the CSCU system have passed resolutions stating that they have lost confidence in Gregory Gray, the system’s president, and his plan for the future, called Transform CSCU 2020. Thursday members of the system’s governing board responded.

To remind the board members of those no-confidence votes, about 50 people were wearing t-shirts referencing language from the adopted resolutions.

“Whereas,” read the front of the shirts, referring to the list of grievances against Gray that begin the resolutions.

“Be it resolved,” the back of the t-shirts read, referring to the no-confidence determinations voted by hundreds of faculty.

“The votes need to be taken seriously,” Stephen Adair, a professor at Central Connecticut State University and faculty representative to the board, told the regents Thursday. “There is serious discontent on the campuses, and it needs to be addressed.”

The response from the regents varied.

“The one thing that I find really puzzeling is there were a couple of attempts to get faculty to define [their] priorities and suggest a process and I never saw that happen,” board member Merle Harris told the faculty. “You say that Transform is not clear, and I will accept some of that, but yet the faculty has not been clear at all about what you might think the priority should be.”

Over the last several months, faculty have submitted broad statements of “values” and “academic imperatives” to the system office. On Thursday, they made more concrete proposals to make college accessible to vulnerable populations, including by opening educational programs in correctional facilities, providing scholarships for students from the state’s lowest-achieving districts, and offering subsidized childcare for students on every campus.

Some of the regents said the faculty outrage is misplaced.

“As I hear the faculty advisory committee and read the report, it struck me that, it sounds to me as though I was reading about a situation where a strategic plan had been developed, had been implemented and fully executed and rammed down the various organizations that comprise the system,” said David Jimenez. “The reality is that this…is a living document. I feel as though the FAC and the reactions we are seeing on some of these campuses has really sort of gotten ahead of itself. This is a process that is ongoing.”

“The fundamental issue between us right now is the lack of trust, and we have to address that,” said Donofrio. “I plan to address that, and that is my commitment to all of you.”

But faculty said the issue is much larger than them misunderstanding what is happening and the problem is they are not being included and are being ignored.

“Statements about wanting faculty input does not square with history,” said William Faraclas, a professor of public health and president of the Faculty Senare at Southern Connecticut State University. “There was no other recourse but to speak with a a loud voice. [The no-confidence votes] are not a smoke signal. It’s a forest fire.”