Senate’s message for domestics, ‘You exist, by law’ 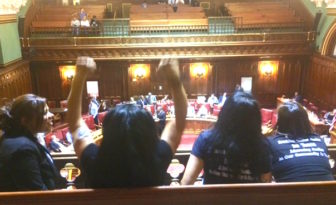 A group celebration in the Senate gallery after passage of a bill recognizing domestics as employees.

As Friday slid toward Saturday, four Brazilian women in identical black T-shirts hugged, giggled and blinked back tears in the otherwise sedate gallery of the Connecticut Senate. Their grinning lobbyist, Bobby Shea, shushed them, without conviction.

Sen. Eric Coleman, D-Bloomfield, the co-chair of the Judiciary Committee, looked up from the Senate floor and raised a bottle of water in their direction, a silent toast. Senate Minority Leader Len Fasano, R-North Haven, laughed and gave them two thumbs up.

On a night when nearly everyone else at the State Capitol was focused on the race to craft a budget deal before the adjournment deadline of midnight Wednesday, the Senate delivered the four women a political victory.

On a 33 to 3 vote, the Senate passed and sent to the House a bill that would define an estimated 40,000 domestic workers in the state as employees, recognition denied 80 years ago with the passage of New Deal labor laws.

The measure was a half-step, falling short of guaranteeing a minimum wage. But the recognition provided the right to complain of discrimination and mistreatment to the Commission on Human Rights and Opportunities.

For the four women, that meant a celebration.

Their names are Natalicia Tracy, Iame Manucci, Maria Lima and Nina Siqueira, and they have been a regular presence at the General Assembly this session, competing with professional lobbyists for the attention of senators and representatives. They say Shea was their mentor and guide.

Over and over, they told their stories, tales of exploitation as nannies, housekeepers and other domestics excluded from wage and hour laws and other protections afforded under state and federal labor laws. Tracy, now an activist with the Brazilian Immigrant Center, says she was a virtual indentured servant for two years in Boston.

Manucci, the daughter of a domestic who also did housekeeping before going to Seton Hall University, where she graduated last year with a degree in international relations, coordinated their campaign in Connecticut. Lima and Siqueria have long histories as domestics.

In March, the Labor and Public Employees Committee reported their bill to the floor, just ahead of the committee deadline. It’s been awaiting action in Senate.

And that’s where the women have stationed themselves for days. Fasano fed them one night, sharing the takeout ordered for his Republican caucus. They talked about their bill, and Fasano pledged his vote.

“They stood here every night,” Fasano said. “That’s what the system should be about – people coming into the Capitol and getting the same access as paid lobbyists.”

They originally asked for domestics to be covered by the state’s minimum wage law, but they compromised, instead accepting a slight broadening of the definition of employee under state law.

State law now defines “employee” as “any person employed by an employer but shall not include any individual employed by such individual’s parents, spouse or child; or in the domestic service of any person.” The bill would delete the last eight words.

“This gives workers a tool, the feeling that, ‘Yes, I matter,” Tracy said.

Manucci said it represented recognition: “The recognition that you have the dignity every other worker has, that you exist — by law.”

After the vote, the women hurried down the stone steps from the fourth-floor gallery to greet Fasano as he emerged from the Senate chamber one floor below. They took turns hugging him, then insisted he pose with them for a picture.

Other lobbyists, most exhausted by the long, slow slog to adjournment, turned to watch.

The House of Representatives also gave final approval Friday night to a measure that generally requires a court to award double damages when an employer fails to pay an employee’s wages and fringe benefits.

The measure, which the House passed 70-69 and which now heads to Gov. Dannel P. Malloy’s desk, also generally requires double damages when an employer fails to pay mandated overtime rates.

The employer also must pay court costs and attorney’s fees under this bill.

Rep. Richard Smith, R-New Fairfield, said too many surveys and rankings identify Connecticut as one of the most unfriendly states toward businesses, adding that this bill only would worsen that reputation.

“We continually rank at the bottom because we enact legislation that goes after employers,” he said.

“Why not just leave it up to the judge?” said Rep. Dan Carter, R-Bethel.

But Rep. Peter Tercyak, D-New Britain, co-chair of the Labor and Public Employees Committee, noted there is one exception to the double-damage requirement which does shield businesses that try to follow the law. It specifies that the requirement doesn’t apply if employers can show a good-faith belief that their underpayments were legal.

Employers, in those instances, still must pay all withheld compensation plus court costs and attorney’s fees.