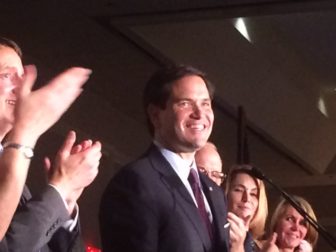 Stamford – At a GOP dinner named for Prescott Bush, patriarch of a Connecticut family that has produced two presidents and one contender, U.S. Sen. Marco Rubio of Florida said Thursday that America craves new leadership.

He named no names. And he spoke with the gentleness of a man reading a bedtime story to a child, not the big voice of a presidential candidate road-testing a message. But Rubio, 44, left no doubt he wants voters to see Jeb Bush, 62, and Hillary Clinton, 67, as unequal to the task.

“The fundamental issue in 2016 is a question of what kind of country are we going to be in this new century,” Rubio told a packed hotel ballroom. “The time has come for this generation to lead the way towards a new American century.”

He was introduced by state Sen. Art Linares, 27, of Westbrook, a fellow Cuban-American who served as an intern for Rubio. Jerry Labriola, the Republican state chairman is committed to Rubio.

“I like him,” former U.S Rep. Rob Simmons said of Rubio. “He reminds me of Jack Kennedy, without the father, without the money.”

It is a comparison that Rubio encourages. If elected, Rubio would be the second Catholic president after Kennedy and the youngest U.S. president since Kennedy. He never mentioned Kennedy by name, but he invoked his 1961 inaugural address.

“Almost six decades ago this nation turned the page on the past. And it chose to pursue a New Frontier. They accepted the challenge, the challenge to ask not what their country could do for them, but what they can do for their country,” Rubio said. “The truth is for far too long, the leaders of both parties have asked for your vote on the promise of what our government can do for you, but I’m asking for your vote on the promise of what together we can do for America.”

His audience included two television personalities who live in Connecticut, Joe Scarborough of “Morning Joe” on MSNBC and Larry Kudlow, the supply-side economist who’s had programs on CNBC. Rubio smiled and gave a shout out to both.

Rubio made no waves in his 27-minute speech to the major annual fundraising dinner of the Connecticut Republican Party. His stump speech, or at least the version still getting play seven weeks into his campaign, is biography and big picture.

He is the son of a banquet bartender and a maid, who could not afford to contribute to his college tuition, leaving Rubio, a lawyer, with $100,000 in college loans he only recently repaid.

“I didn’t inherit any money or any real estate from my parents. Even now I have a mortgage that takes up a significant amount of our family budget. And yet I consider myself to be a child of privilege, because I was raised in a stable home by two parents who loved each other and were married and who taught us –“

He was interrupted by applause.

“– two parents who taught me there was no dream too big or goal too high.”

Rubio folded a zinger against Hillary Clinton into his story of growing up poor.

“I even heard some people suggest I might not be rich enough to be president. And it’s true, I didn’t make over $11 million last year giving speeches to special interests,” he said. “I don’t have a family foundation that raised over $2 billion from Wall Street and foreign interests.”

A year ago on the same stage, Jeb Bush talked passionately of the need for immigration reform, but Rubio said nothing Thursday to upset the Tea Party activist who helped him defeat Charlie Crist, the Republican turned independent, in the 2010 Senate race.

“We will redesign our anti-poverty programs so that they cure poverty through education, responsibility and work,” Rubio said. “And I will appoint judges and an attorney general that will protect our Second Amendment rights and defend those who uphold traditional values.”

He was applauded. Connecticut’s GOP is both smaller and more ethnically diverse than in the days when Prescott Bush of Greenwich was a U.S. senator.

Rubio’s candidacy poses a special problem for Jeb Bush, the one-time mentor who shares the same political base of Florida. Rubio was unapologetic for crowding Pres Bush’s grandson.

“Now, there are those who suggested I wait my turn. That’s the same thing they said back in 2009 when I ran for the Senate against the then Republican governor of my state of Florida,” Rubio said.

Connecticut is a good place to pick up fundraising help, but Tom Foley is already off the market. He’s signed up with the exploratory effort of New Jersey Gov. Chris Christie, who supported Foley’s gubernatorial campaign last year.

“He’s very talented,” said Foley, who says he is unworried by Christie’s standing in the ever-growing field of GOP presidential candidates, declared and otherwise. “It’s early.”

State Rep. Terrie Wood of Darien, a native of Ohio, says she is waiting to see if Ohio Gov. John Kasich gets into the race.