Coming to a school near you: Ratings from 1 to 5 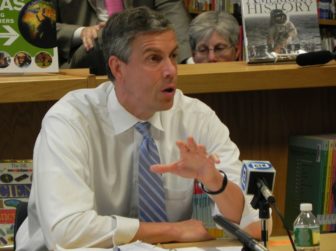 NEW HAVEN — Every public school in Connecticut will be rated 1 through 5 this winter.

In addition, every high school junior will be required to take the SAT test as opposed to the Smarter Balanced Assessment, a controversial exam aligned to the Common Core State Standards.

And teachers will have another year before student test scores begin being factored into their evaluations.

Those are just a few of the changes that the U.S. Department of Education approved for Connecticut schools Thursday. Connecticut had asked for flexibility to make the changes under the No Child Left Behind Act so it would not be penalized under the law’s rigid requirements.

“I am confident that Connecticut will continue to implement the reforms described in its approved flexibility request and advance its efforts to hold schools and local education agencies accountable for the achievement of all students,” Ann Whalen with the U.S. Department of  Education wrote Thursday to Connecticut’s education commissioner.

Schools and districts will be judged on more than just test scores in arriving at their 1-through-5 rating. Reducing chronic absenteeism, graduation rates, access to art classes, physical fitness and enrollment of students in college will also be taken into account.

The Smarter Balanced Assessment exams have been harshly criticized by some teachers and parents.

“All indications are that this test is not a valid indicator of student knowledge and skills,” Sheila Cohen, a teacher and president of the state’s largest teachers’ union, said Thursday during a a press conference at the state Capitol.

“A growing number of parents and advocates have joined classroom educators in recent years to sound the alarm over the use of unreliable tests and methods in assessing student performance. This move is a significant step in the right direction because the SAT, unlike the SBAC tests, is a validated assessment,” said Jan Hochadel, president of the state chapter of the American Federation of Teachers.

In an effort to allay concerns that students are being over-tested, state legislators voted earlier this year to replace the Smarter Balanced Assessment for high school juniors and study whether the test is appropriate for other grades.

With the federal government’s assent to using the SAT instead, Connecticut becomes one of the first states to win federal approval for replacing a test aligned with the Common Core with another one.

“Connecticut has submitted a high-quality plan for transition to this new assessment,” Whalen wrote.

Connecticut, which has some of the largest achievement gaps in the nation between minority students and their peers, also won approval for a new accountability system.

“While exams that test college readiness are essential to helping us gauge where we are as a state and help guide instruction, we are doing our part to mitigate over-testing – a common concern among parents.  There’s a balance to be struck, and we’re working to reach it,” Gov. Dannel P. Malloy said in a statement.

The state’s education commissioner had expressed some “major concerns” early on with switching to the SAT. Among those concerns were cost and whether the  College Board, which administers the SAT, would be able to provide appropriate accommodations for disabled students or those that speak limited English.

On Thursday, she said those concerns had been addressed.

“We were very pleased to resolve those concerns,” the commissioner, Dianna Wentzell, said.

Advocates point to the benefits of switching to the SAT. Chief among them is removing obstacles students might face in taking the college-entrance exam, including cost and transportation.

Twelve-thousand public school students in Connecticut graduate high school each year without ever taking the SAT. Depending on the school, SAT participation rates range from 100 percent to only 23 percent. (See your school’s participation rate here.)

Connecticut will become the 17th state to offer a college-entrance exam to all high school juniors, reports the Education Commission of the States, a nonpartisan think tank that tracks education policy.

Garth Harries, the superintendent in New Haven, said reducing the number of tests juniors must take is smart.

“The cow doesn’t get heavier when you weigh the cow more often, “said Harries at a press conference in New Haven with the governor. “This is a significant victory for common sense.”

This approval from the U.S. Department of Education comes as the Congress is attempting to update federal education law. The U.S. House and Senate have approved separate bills that would still require students to be tested annually, but would let states determine what to do with the results, essentially leaving accountability up to them.

“Count me very hopeful we will have a new elementary and secondary act by the end of the year,” said Democratic U.S. Sen. Richard Blumenthal.

Outdoor, in-person graduations for up to 150 students will be allowed as early as July 6 if current trends continue.