Joe Scarborough is firm on taxes, less so on his plans 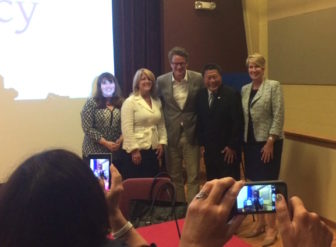 Fairfield – With the help of MSNBC’s Joe Scarborough, a conservative think tank opened a small-government, anti-tax road show Thursday that marked the soft opening of the 2016 contest for the Connecticut General Assembly.

Less clear was whether the event also was an early exploratory step by Scarborough, a Republican former Florida congressman who lives in Connecticut, toward a campaign in 2018 for governor or U.S. Senate.

“Right now, I don’t have any plans,” a playful Scarborough told The Mirror. “Things could change. I could win the lottery. I could be a rock star. I could run for Senate, for governor or something like that, but right now, no.”

Scarborough, 52, laughed at the suggestion that he might be encouraging talk of a political run to gain leverage for a new contract with MSNBC, where he hosts “Morning Joe.”

“No, I’m not yanking MSNBC’s chain. I’m a smart man,” he said. “I’m under contract for the next couple of years, and I love my job. I’ve got a great job.”

Scarborough played a role in a political moment last spring that the Yankee Institute for Public Policy, the host of Thursday’s forum, hopes to nurture into a continuing conversation about taxes, the sustainability of state government and the business climate.

On his show, he kept up a withering critique of the tax increases adopted by Gov. Dannel P. Malloy and the Democratic-controlled General Assembly, which prompted a threat by General Electric to move its headquarters from Fairfield to another state.

GE’s threat still is playing out, with stories about the Malloy administration trying to fend off relocation offers from New York and Georgia.

Scarborough, who describes himself as a small-government conservative who happens to have fallen for life in blue Connecticut, said the thrust of his commentary was nothing new. And while people speculate on the meaning of his hosting the Yankee Institute’s forum, he said he’s appeared before the think tank before.

The difference is the timing, he said.

“I think it’s because everything is so politically charged in Connecticut right now,” he said. “It was a perfect storm. I’ve been giving speeches for 25 years. I’ve been saying the exact same thing for 25 years.”

The forum at Fairfield University was the first of what Yankee is calling its “Shirt Off My Back Tour.”

“We love just about everything about Connecticut, except Hartford,” said Scarborough, a resident for four years. “I want to make sure when my kids graduate from high school and college they can come back.”

Liebau, the president of Yankee, said the delegation’s Democratic member, Rep. Cristin McCarthy Vahey, was invited but had a conflict.

“This is not a partisan battle,” Scarborough said.

But the discussion at times took on the tone of a Republican campaign rally, prompting Liebau to occasionally remind the audience that Yankee is a non-partisan organization with tax-exempt status.

Other GOP legislators were in the audience, including Sens. Michael McLachlan of Danbury, Art Linares of Westbrook and Toni Boucher of Wilton and Rep. Devin R. Carney of Old Saybrook.

Liebau said the state seems ready for a serious reappraisal of the state’s tax burden and the sustainability of its government.

“We are reaching either a tipping point or a turning point,” she said.

Scarborough, who says he enjoys Malloy as a guest on his show, was not entirely unkind to the two-term Democratic governor.

Smiling, he added that they’d also all agree Malloy made it worse.