Nearly one-quarter of the university officials and other non-union staff who work at Connecticut’s largest public college system are paid more than their peers at other schools and above what the market requires, consultants have informed the Board of Regents.

The regents, the college system’s governing board, is set to vote Thursday on proposed new pay scales that align future employees’ salaries with the market and limit how much the system’s 297 non-unionized staff can be paid. They will also vote on exempting present employees who are paid over the scale, though raises for them would eventually be limited starting in 2018.

How much are these 64 employees currently paid, and how much is that over what their peers elsewhere with similar experience are paid, after adjusting for Connecticut’s high cost of living?

A request by The Connecticut Mirror on Sept. 4 for documents the consultants, Sibson Consulting, provided to the regents was initially denied. The Mirror was told by the system’s spokesman that Sibson did not produce any public documents, and its work was done by meeting with college staff and verbally sharing their findings.

But the regents’ $190,500 contract with Sibson outlines several reports that the organization was expected to produce, including a “competitive market analysis.”

After pointing out the inconsistency, regents’ spokesman Michael Kozlowski said Monday that staff plans to fulfill The Mirror’s Freedom of Information Act request. 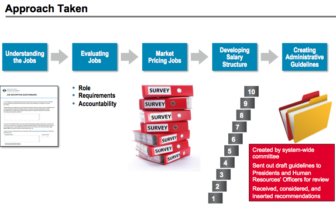 “CSCU jobs were matched to more than one survey to get an accurate reflection of the market consensus,” reads a presentation made over the summer by Sibson officials on the goal of developing a new salary scale. “The midpoints and midpoint progressions are designed to mirror the competitive marketplace.”

It’s unclear whether the salary information will be released before the board votes.

However, the salary limits these 64 employees will be exceeding have been made available.

For example, the director for research and system effectiveness, who works for the system’s central office, makes more than $162,000. A dean of students at a community college makes more than $137,000. And an executive assistant to a president of a regional Connecticut State University makes more than $85,000.

These figures only reflect an employe’s base salary, and does not factor in the cost to the college system of providing health care and future retirement benefits.