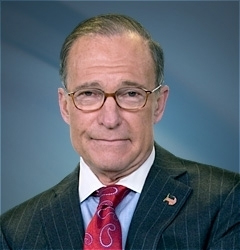 Washington – CNBC host and conservative commentator Larry Kudlow denied on Monday that he has decided to run against Sen. Richard Blumenthal, saying he is still mulling over whether he will challenge the popular Connecticut Democrat.

In a tweet, Kudlow said a story in the New York Post  that said he had made up his mind was “not accurate.”

“I have not made any final decision,” Kudlow said.

But he said “did not talk to him.”

An associate of Kudlow said Monday the conservative commentator is “still considering” a challenge to Blumenthal, whose seat is up next year, “but hasn’t made up his mind.”

Dicker’s story said Kudlow notified New York State Republican Chairman Ed Cox of his decision “days ago, in what is widely seen as a serious embarrassment to Cox, who has told associates for months that Kudlow would be his party’s candidate against (New York Sen Charles) Schumer.”

The story was based on anonymous sources.

In early summer, Kudlow said he would run against Blumenthal if the Democratic senator supported a nuclear agreement with Iran. After much deliberation, Blumenthal supported the deal.

Blumenthal has used the threat of a challenge from Kudlow to raise campaign money through blast email solicitations.

“It’s never good news when The New York Times says a right-winger might raise up to $30 MILLION to defeat you,” said a Blumenthal fundraising letter released last week.

“Conservative talking head Larry Kudlow is going to collect all that Wall Street money so he can take his trickle-down theory and his attacks on the social safety net all the way to Washington.”

Kudlow would likely to have to give up his radio and television programs if he runs. That may a financial loss he’s not willing to take, some analysts say.

But if Kudlow does run “Blumenthal could end up with a more serious race than he ought to have,” said Cook Political Report analyst Jennifer Duffy”

Kudlow would face a GOP primary challenger. August Wolf, a Stamford businessman  and former Olympic shot putter is also seeking the Republican nomination to run against Blumenthal. Like Kudlow, Wolf has been highly critical of Blumenthal’s stance on the Iran pact.