Blumenthal keeps his consumer focus with a shot at VW 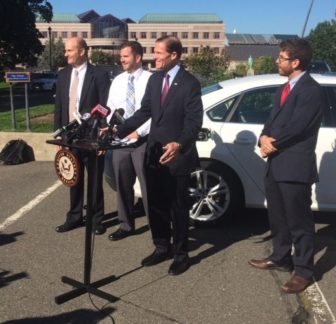 The sun and the realities of the modern news cycle shone brightly Monday on U.S. Sen. Richard Blumenthal as he stood in front of a 2014 Volkswagen Passat outside the State Capitol with two lawyers and their client, Drew Mizak.

For the second time during the three-day Columbus Day weekend, Blumenthal called on the federal government to impose a maximum $18 billion fine on VW for defrauding U.S. customers like Mizak by rigging their diesel engines to pass emission tests.

“Between 2009 and 2014, Volkswagen committed a massive fraud, unprecedented in the annals of automotive history and maybe in the history of consumer protection around the world,” Blumenthal said, standing before cameras from four news stations.

The Volkswagen scandal is the latest consumer issue seized on by Blumenthal, who has made consumer protection a priority in his five years in the U.S. Senate, much as he did during his 20 years as Connecticut’s attorney general.

“Nothing could be more appropriate for a federal official who has an interest in consumer protection,” Blumenthal said after the news event Monday. “The federal government should be a vigorous, vibrant force for justice when it comes to consumers.”

Earlier this year, Blumenthal co-sponsored the Hide No Harm Act of 2015, a bill inspired by the failure of General Motors to disclose a faulty ignition switch now blamed for at least 124 deaths. It would subject corporate officers to criminal prosecution for failing to disclose a defect endangering the public.

“They killed more than 120 people,” Blumenthal said. “So far, nobody has gone to prison, which is outrageous.”

Blumenthal, 69, is poised to begin his 2016 re-election campaign for a second six-year term as one of Connecticut’s best-known and most popular politicians. His job approval rating as measured by the Quinnipiac University poll in March was 64 percent, with only 26 percent disapproving.

He said his role as a consumer advocate in the Senate, where he is ranking Democratic on the consumer protection subcommittee of the Commerce Committee, is in the tradition of former Sens. Howard Metzenbaum of Ohio, Frank Lautenberg of New Jersey and William Proxmire of Wisconsin.

“This role is hardly original. Just like the attorney general doing consumer protection was far from novel when I did it,” said Blumenthal, who was Connecticut’s second full-time attorney general after Joseph I. Lieberman.

Blumenthal said his advocacy has made a difference, even as a Democrat serving in the minority. He claimed credit for GM establishing a compensation fund for victims of the faulty ignitions.

“It’s not just the bully pulpit. It’s also achieving results,” Blumenthal said. “The compensation fund that GM established largely was the result of my calling for it.”

Mizak, a schoolteacher from Plainfield who owns two VW diesels with his wife, Cara, was contacted by Blumenthal’s staff after he was identified in news reports as one of the first plaintiffs to file a class-action lawsuit against the automaker.

The Environmental Protection Agency accused VW on Sept. 18 of rigging 11 million diesel cars worldwide to run clean during emissions tests, hiding the fact that during regular operations their power and high fuel-economy came at the cost of dirty exhaust.

On Sept. 28, Bruce E. Newman and Cody N. Guarnieri of Brown Paindiris & Scott sued the automaker in U.S. District Court on behalf of Mizak and up to 500,000 other owners of the affected diesel cars in the U.S. Their class action suit is one of many filed in jurisdictions across the nation.

“We bought these cars after an aggressive marketing campaign by Volkswagen, where they claimed that these cars were the best of both worlds: They were environmentally friendly, efficient. And at the same time you didn’t sacrifice performance,” Mizak said.

Blumenthal said VW’s response so far – it promises to fix the software that produces the false emission results — is inadequate. The owners will be left with cars that have poor fuel efficiency and lower resale values, he said.

“It mocks the buyers who in good faith bought these cars thinking they were going to get an environmentally friendly car.” Blumenthal said. “What they received was a fraud on wheels.”