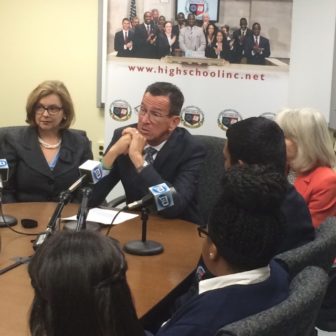 Gov. Dannel P. Malloy engaged in some unconventional  lobbying Friday to signal to legislators an unwillingness to scale back his transportation initiative or give up on cutting at least some social services to close a mid-year deficit.

Malloy chose High School, Inc., a downtown Hartford magnet school for business-minded students, to talk about the need to stabilize the finances of a government that he described as among the most generous in the U.S.

“We’ve chosen to provide a lot of services other states don’t,” he said. “What’s interesting about people in Connecticut is they don’t want to pay taxes to do that, but they also don’t want to cut the services, which means that really what they want is a magician, not a governor.”

The students laughed, a reaction he was unlikely to get at the State Capitol, where the Democratic majority in the House of Representatives met for three hours in caucus Friday to discuss how to close a $118 million shortfall disclosed Monday in the current state budget.

Also on the agenda: Whether to revise $103 million in cuts largely aimed at hospital and social services that Malloy ordered five weeks ago in response to slower-than-projected growth in tax receipts.

Malloy told the students that unless legislative leaders suggest alternative cuts, or allow him more flexibility in making mid-year budget adjustments, he’ll have few options: “I’ll have to go back and make cuts from the same areas in which I already made cuts.”

He ostensibly was answering a student’s question, but the governor made no effort to conceal that his true audience was the legislature.

“Good question,” Malloy told the student. He smiled and added, “That allowed me to make a point I wanted to make.”

He also dispatched his transportation and economic development commissioners to deliver a briefing to the press about the need for transportation infrastructure improvements to grow the economy.

The briefing was meant to underscore that Malloy is unlikely to give up the funding source he won in the previous legislative session — a half point on the sales tax — for the early years of what he hopes will be a 30-year commitment to transportation.

Malloy is scheduled to begin bipartisan talks with legislative leaders Monday about how to address shortfalls in the current budget and those to follow.

House Speaker J. Brendan Sharkey, D-Hamden, said his caucus wants to restore some of the cuts to hospitals and social services. To do that, without raising taxes, means finding cuts in other areas.

“If we’re going to come into special session, funding would be restored for hospitals as part of that package, at least to some degree,” Sharkey said. “We have a different set of priorities when it comes to hospitals and social services, and our members want to stay true to that.”

The speaker was equally adamant, though, that Democratic legislators are unwilling to consider cuts to their big initiative in the new budget: a plan to dramatically expand municipal aid and to cap property taxes on cars.

Like Malloy’s transportation initiative, the municipal aid program is funded with a portion of the state’s annual sales tax receipts.

“I’m not wishy-washy about that at all,” Sharkey said. “That is a fundamental pillar of the budget that is going to give real property tax relief to property taxpayers throughout the state of Connecticut … Come next July we are going to deliver on that promise.”

Sharkey said the legislature is unlikely to adjust the budget in special session until mid-November, when the nonpartisan Office of Fiscal Analysis will update projections on revenues and spending trends for this fiscal year and the next two.

The 2017-18 fiscal year, the first one after the 2016 state elections, is crucial. Analysts already are estimating state finances, unless adjusted, would run close to $1 billion in deficit that fiscal year.

Legislators and the governor should begin exploring budget adjustments now, but the mid-November report will provide “the really hard numbers we need to really know the extent of the problem,” Sharkey said.

Advocates for the network of private, nonprofit agencies that provide the bulk of the state’s social services were at the Capitol on Friday, pressing lawmakers to do more than draw a line in the sand against future cuts.

Funding for nonprofit agencies largely has remained flat in the adopted state budgets over the past seven years. But because of emergency cuts ordered after budget adoption by governors in several of those years, many agencies actually have seen their state payments decline.

“The preponderance of cuts keep hitting us hard,” said Pat Johnson, interim executive director of the Connecticut Association of Nonprofits. “They need to look somewhere else.”

And unless the state begins investing more dollars in community-based social services, added Barry Simon, president of Hartford-based Oak Hill – one of the largest nonprofit agencies serving people with intellectual and other disabilities – that network won’t be strong enough to serve more clients as state-operated facilities close in future years.