A fight on Wednesday about who really won on Tuesday 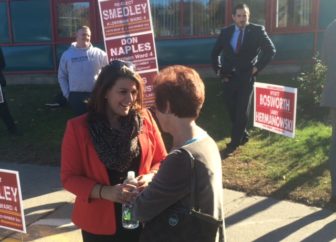 The polls closed at 8 p.m. Tuesday, but Democrats and Republicans kept punching Wednesday like two fighters who didn’t hear the bell, battling over what constituted a political win or loss in Connecticut’s 2015 municipal elections.

Thanks to the GOP’s own metric – it loudly pronounced the election a referendum on the tax policies of the unpopular Gov. Dannel P. Malloy – the Democrats could credibly lay claim to winning at least the immediate messaging battle.

Republican State Chairman J.R. Romano had targeted Michael Tetreau, the Democratic first selectman of Fairfield. The town is the corporate home of General Electric, the poster child for business dissatisfaction with the Malloy administration.

Also on the public GOP target list were Mayor Anita Dugatto of Derby, where Romano grew up, and First Selectman Julia Pemberton of Redding. Both are Democrats who had unseated Republicans two years ago. Tetreau, Dugatto and Pemberton all retained their seats, though the GOP won a majority on Fairfield’s Board of Selectmen.

“Their strategy isn’t working,” said Leigh Appleby, spokesman for the Democratic Party. “We’ve been saying all along these elections are going be about local issues.”

One of the GOP’s bright spots was New Britain, where the 28-year-old first-term mayor, Republican Erin Stewart, declined to use the playbook drafted by Romano, whom she counts as a friend and ally.

“People are so sick of negative campaigning,” she said. “They want civility in our government.”

Standing outside a polling place with Romano on Tuesday, Stewart said she and her team campaigned strictly on local issues, taking no shots at Malloy. She was rewarded with re-election — and a GOP majority on the council.

If Republicans lost the P.R. battle, they actually competed closely at the polls.

Democrats unseated at least six Republican mayors or first selectmen, but the GOP also knocked off at least six Democratic incumbents, with the fate of another awaiting a recount.

The GOP countered in Haddam, Marlborough, Pomfret, Southbury, Stonington and Weston. The winner in Stonington was Rob Simmons, 72, the former congressman whose last run was for U.S. Senate.

Republicans still have a shot of unseating Clinton’s first selectman, Democrat William W. Fritz Jr., who appeared to be tied Tuesday night by Republican Bruce Farmer. A recount is scheduled for Saturday.

Republicans won open seats in Lebanon and Newington that had been held by Democrats. They also held onto seats taken from Democrats two years ago in Branford, Bristol and New Britain.

One Republican victory was surprisingly close. Timothy M. Herbst, the first selectman of Trumbull and the 2014 GOP nominee for state treasurer, won by just 357 votes. Herbst had run aggressively against Malloy’s record.

“We’re going to continue to hold the majority of municipalities in the state,” Romano said.

Romano said he counted the election of Ganim, who was forced from office in 2003 by a corruption conviction, as a messaging and organizing bonanza for the GOP. In a message emailed Wednesday to Republicans, the subject line was “Joe’s Party.”

“Because of Connecticut Democrats, our state is a national laughingstock. Our largest city has a crook for a mayor,” Romano said. “Now it is the critical time to redouble our efforts to take back Connecticut and elect Republicans statewide in 2016 and beyond.”

Nick Balletto, the Democratic chairman, sent a similar email to Democrats, claiming a victory the previous night: “But we can’t just rest now — the work for 2016 starts right now, and we need to know you’re with us.”

All 187 seats in the General Assembly are up for election next year, a presidential year when U.S. Sen. Richard Blumenthal, a Democrat, also is expected to seek his second term. Malloy won’t be on the ballot, but his tax policies are certain to be part of the legislative campaigns.