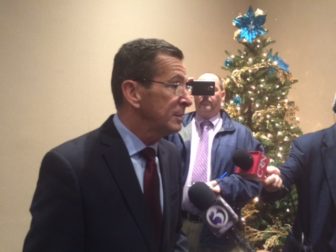 Cromwell – Gov. Dannel P. Malloy said Tuesday he will make a second try next year for a constitutional “lockbox” to safeguard transportation revenue and vowed to campaign against any legislator who opposes it should the measure fail.

“If it goes down again, you can be assured I’ll campaign against anybody who didn’t vote for it,” Malloy told reporters after his annual end-of-year speech to the Middlesex Chamber of Commerce.

A resolution calling for a constitutional amendment protecting special transportation revenue was approved overwhelmingly by the General Assembly in special session last week, but fell short of the three-fourths supermajority to place it on the ballot next fall for ratification by voters.

In his speech to the chamber, Malloy confirmed what had been expected: He would ask the legislature again in 2016 to try for a three-fourths vote that would provide the fastest path to amending the constitution.

Without a supermajority, successive legislatures would have to approve the same resolution in different years, delaying a referendum until 2018.

“It’s inappropriate for the governor to resort to bully tactics and making executive threats to secure the votes he needs to pass legislation,” Fasano said. “All legislators have a right to disagree, including those Republicans and three Democrats who voted no. Republicans agree with the governor’s theory, but some believed it simply wasn’t strong enough.”

Passage of a constitutional “lockbox” is a prerequisite to Malloy’s eventually seeking additional revenue for his ambitious transportation infrastructure plans, and failure to win passage in 2016 could complicate any debate in 2017 over tolls, fuel taxes or other dedicated transportation revenue.

A study panel is not expected to make recommendations about new sources of transportation funding until next year, and the legislature is unlikely to consider a vote on any tax increases until after the 2016 elections.

Malloy, a second-term Democrat trying to leave a legacy of long-term transportation improvements, said last week he saw the vote by the General Assembly as progress, given the reluctance of legislators in his own party to take any steps that might restrict the uses of revenue.

But he was more combative Tuesday.

As a procedural matter, Malloy cannot submit the same version of the lockbox amendment in 2016, and he also needs to win over at least 14 House members. But he indicated he saw no need for major revisions, even though GOP opponents say the measure was not sufficiently stringent.

The measure passed unanimously in the Senate and by a vote of 100 to 40, with 11 absences, in the House. He needs at least 114 votes in the lower chamber.

Fasano warned that even Senate Republicans who voted for the measure thought it could be improved.

“If the governor wanted to make the lockbox stronger he could ensure sound funding for transportation by better protecting the sources of revenue,” Fasano said. “Conversation to strengthen legislation certainly would enhance Connecticut’s transportation fund and should always be welcomed, not dismissed.”

The ‘lockbox’ was crafted to ensure that tax receipts and other revenues were locked in only on an incremental basis — a priority for Democratic leaders who insisted some flexibility would be needed to handle big general fund deficits in the next two fiscal years.

For example, the 25-cents-per-gallon retail gasoline tax, and the $511 million it raises annually, is spent solely on transportation, and would have been dedicated for that purpose — in perpetuity — if that ‘lockbox’ language were ratified.

But receipts from any future increases in the retail gasoline tax still could be spent outside of the transportation fund.

Senate Republicans and a minority of House GOP members said this approach, while flawed, was better than nothing.

But 37 of the 63 House Republicans present last week balked at a system in which gasoline taxes, tolls or other fund-raising mechanisms traditionally applied to transportation still could be used in the future to support non-transportation programs.

Five freshman Republicans from eastern Connecticut who voted against the measure – Reps. John F. Scott of Groton, Mike France of Ledyard, Kathleen McCarty of Waterford, Aundré Bumgardner of Groton and Doug Dubitsky of Chaplin – released a lengthy statement last week outlining what they saw as flaws in the amendment:

“This bill failed to define the source of revenue coming in, allows diversions before the money even gets to the fund, and even allows the legislature to continue adding expenditures. That means when state budgets get tough, the legislature can simply vote to raid the ‘lockbox’ again.  Effectively, this allows the legislature to shift money from one pocket to the other as a way to balance a budget without having to actually reduce state spending.”

Three Democrats  joined the GOP in voting no.

On Tuesday, at least, the Democratic governor made no overtures to them.