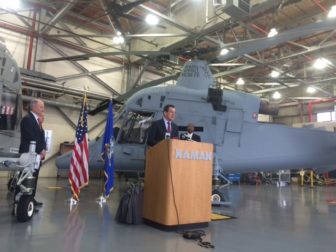 Gov. Dannel P. Malloy and the K-MAX. At left is Neal Keating, the company’s president.

Bloomfield – More than three years after a trade mission to China, Gov. Dannel P. Malloy celebrated Tuesday what he says were the fruits of that trip: An order from China for two K-MAX helicopters, a rugged utility aircraft manufactured by Kaman Aerospace.

The K-MAX, which is returning to production after a hiatus of 11 years, is a single-seat, heavy lift aircraft used in logging, fighting forest fires and delivering cargo. The Marine Corps used two unmanned versions to resupply forward bases in Afghanistan.

The helicopters will be used by the China Department of Forestry for firefighting.

Malloy and Neal Keating, the chief executive of Kaman, spoke to reporters in a flight-test hangar, standing in front of three K-MAX helicopters, an ugly-duckling aircraft with a bulbous nose and two intermeshed rotors.

The craft was the last designed by the company’s founder, Charles Kaman, who had a fondness for counter-rotating helicopters. They are powered by intermeshed rotors spinning in opposite directions, a configuration that provides stability without a tail rotor.

The K-MAX design makes it relatively cheap to build, operate and maintain. Keating calls it “a helicopter to do dull, dirty work.”

It was produced from early 1994 to 2004, when business dried up and Kaman closed its production line. The company produced about 35 aircraft, with a price estimated in the aviation press of between $5 million and $8 million.

Keating said the helicopters it built for the Marines cost about $7 million, not including the Lockheed Martin modifications that allowed the craft to fly without an onboard pilot.

Kaman plans to produce at least 10 helicopters in its latest production run, with eight of the 10 already under contract. The first helicopters will be deliver in 2017 to two existing customers, Rotex Helicopter of Switzerland and U.S.-based Helicopter Express.

The new aircraft will be produced in Bloomfield and Jacksonville, Fla.

On a trade mission led by Malloy in 2012, officials from Kaman and the U.S. Department of Commerce had their first meeting with Chinese forestry officials.

Anne S. Evans, director of the Commerce Department’s office in Connecticut, who was on the trip, said the presence of high-ranking elected officials is helpful in opening doors.

“It makes a huge difference,” she said.

Keating said Kaman is optimistic that getting into the Chinese market will mean more orders. China only flies 600 helicopters, compared to 10,000 in the U.S.

The reopened production line is expected to stabilize employment, but not immediately create new jobs at Kaman, which employs 1,100 employees in Connecticut, including 900 on its main Bloomfield campus.

Kaman is a small player in the helicopter industry, with about $600 million of its annual $1.8 billion in revenue derived from its aerospace business. By comparison, Sikorsky Aircraft reported about $7.5 billion in revenue from sales last year.