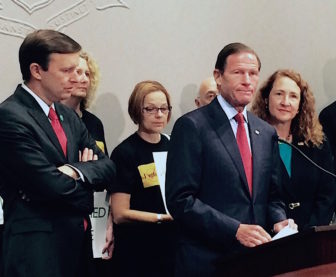 Connecticut’s U.S. senators, Richard Blumenthal and Chris Murphy, and one of its representatives, Elizabeth Esty, were among the officials President Obama expected to brief late Monday afternoon on plans to bypass Congress and use his executive powers to curb what he described over the weekend as “our epidemic of gun violence.”

“I assume he is going to describe to us the measures he’ll be announcing tomorrow,” Blumenthal told reporters Monday after an event in Hartford, shortly before his return to Washington.

Gov. Dannel P. Malloy, who signed one of the nation’s strongest gun control bills into law in 2013, and Esty were among the guests planning to attend the president’s announcement late Tuesday morning in the East Room of the White, the governor’s office said.

Blumenthal and Murphy planned a news conference in Hartford on Tuesday afternoon to reinforce the president’s expected call for restrictions on high-volume gun sales at gun shows that are permitted in many states without background checks.

The latest flurry of activity around gun control began when Obama announced during a radio address on New Year’s Day, when he recalled the school massacre in Newtown, he would meet Monday with Attorney General Loretta Lynch to review options available to him without congressional approval.

“Last month, we remembered the third anniversary of Newtown,” Obama said. “This Friday, I’ll be thinking about my friend Gabby Giffords, five years into her recovery from the shooting in Tucson. And all across America, survivors of gun violence and those who lost a child, a parent, a spouse to gun violence are forced to mark such awful anniversaries every single day.

“And yet Congress still hasn’t done anything to prevent what happened to them from happening to other families. Three years ago, a bipartisan, common-sense bill would have required background checks for virtually everyone who buys a gun. Keep in mind, this policy was supported by some 90 percent of the American people. It was supported by a majority of NRA households. But the gun lobby mobilized against it. And the Senate blocked it.”

Blumenthal, Murphy and Esty, all Democrats have been outspoken supporters of the president on gun control. Esty’s 5th Congressional District includes Newtown.

Connecticut and New York passed sweeping gun control measures after the shooting deaths of 26 children and staff at Sandy Hook Elementary School in Newtown, including universal background checks in Connecticut, but a similar effort failed in the U.S. Senate.

The administration has since shifted its focus to the limits of executive action, exploring whether the president could unilaterally require background checks on sales involving high-volume dealers.

Blumenthal said he expected Obama still would need legislation to follow through on his intention to use the “no-fly list” and other terrorism watch lists to screen gun purchases.

“Steps under the ‘no-fly list’ may require legislation to be as broad as they need to be. He may be able to take some steps,” Blumenthal said. “All of these steps that he can do administratively are nowhere near as broad as we need to do legislatively.”

Blumenthal said he hoped the president’s actions would “give impetus to advocates like myself who believe more can and must be done, because Congress’s inaction has created the need for this presidential initiative.”

On Dec. 10, Malloy announced he would use his executive authority to use terrorist watch lists to screen gun purchases should the Obama administration provide the necessary access.

Malloy said Monday he has yet to hear if the access would be granted through NICs, the National Instant Criminal Background Check system created by the FBI in 1998. New Jersey police said they have used the data to screen gun purchases for two years.

The governor has yet to fully explain how his executive powers would allow him to unilaterally alter criteria set by state law. New Jersey’s screening system was amended by legislation.

Unlike Obama, who has little chance of winning passage of gun-control laws in Congress, Malloy could seek legislation from a Democratic-controlled General Assembly.

Murphy used his Twitter feed over the weekend to list every mass shooting in the U.S. over 2015. 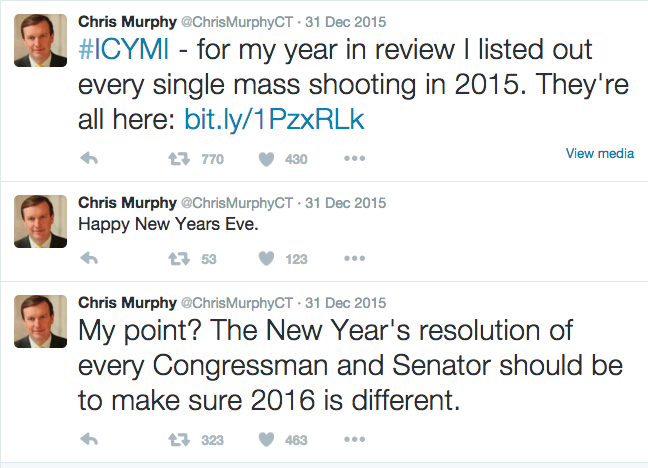