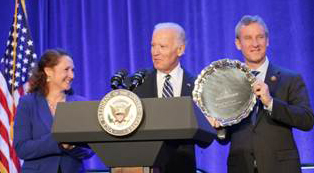 Baltimore – Connecticut lawmakers are gathering here with their House Democratic colleagues to network and plan strategy in a key political year for their party.

Connecticut’s all-Democratic House delegation has been in the minority since 2011 and stands a good chance of continuing to be after November’s elections because they need to pick up 30 seats to leave the political wilderness. (The largest recent shifts in the balance of power in the House were in 1994, when the GOP gained 52 seats, and in 2010 when that party picked up 63.)

But in Baltimore Thursday there was hope.

“I think the House we can win,” said Vice President Joe Biden, at the House Democratic retreat.

He said Democrats could win seats by hammering the GOP for what he called favorable treatment of the rich at the expense of education and health care for the poor.

“I don’t know why we don’t keep pounding on this,” Biden said.

She said she discussed the assignment beforemand with Newtown First Selectman Patricia Llodra.

“She said ‘You should let him know the difference he has made in this community,’” Esty said, a reference to the vice president’s efforts on gun safety.

Esty also said “At a time when the GOP is shouting about making America great, our vice president, Joe Biden, is already a great man.”

To catapult into the majority on Capitol Hill – and there’s a good chance that could happen in the Senate – Democrats are counting on a coattail effect from a Hillary Clinton campaign.

They are almost giddy about the prospect of Donald Trump becoming the Republican party’s nominee for the White House because they believe he would alienate moderate Republican and independent voters.

“We may be given a gift from the Lord in the presidential race,” Biden said.

“You have to compare it to the quality and level of discourse on our side,” DeLauro said. “The Democrats are focused on the critical issues that we face.”

Every member of the Connecticut delegation to the U.S. House of Representatives has endorsed Clinton, as have the state’s Democratic senators, Richard Blumenthal and Chris Murphy.

The stakes are so high in this political year that Rep. Jim Himes, D-4th District, said he plans to volunteer as a campaign worker for Clinton in New Hampshire, where Democratic rival Sen. Bernie Sanders of Vermont has an edge.

Himes said he is “an early supporter” of Clinton and hopes for “a good result in New Hamphire.”

“The contest is going to be close,” Himes said.

The three-day retreat, called United for Opportunity, is also a chance for attendees to network and to “ask for help and guidance from other people,” said Esty. She called the gathering an “intellectual boot camp” because it featured an array of speakers. Those included mega-donor to the Democratic Party Tom Steyer, president of NextGen Climate, and AFL-CIO President Richard Trumpka and Trevor Noah of the Daily Show.

“It’s a good opportunity to for 45 minutes to think about policy instead of 5 minutes that’s allowed during the hectic session and build personal relationships,” Himes said.

But politics was a priority.

“It’s about getting on the same page and trying to form the debate,” Esty said.