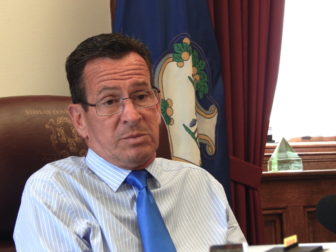 Gov. Dannel P. Malloy in his office after the last legislative session ended in June.

After struggling to extract spending cuts from legislators last year, Gov. Dannel P. Malloy will propose a new state budget that gives departments much greater discretion to decide how their money is spent.

Sources familiar with the governor’s 2016-17 budget proposal say it won’t assign agency funding to many specific programs, moving instead toward the block-grant system used for state colleges and universities.

A block-grant system could tilt the balance of power away from the legislature, since lawmakers often use line items in the budget to shape executive agencies and programs and set priorities.

The administration intends to recommend new spending reporting mechanisms to bolster transparency, anticipating another concern of lawmakers, a source said. Details of those mechanisms were not available.

But the proposal still is likely to spark a battle between the branches of government over control of line-item appropriations and a debate over whether block grants would mask funding cuts for programs before a new budget is implemented. This could spare legislators from criticism in a state election year, but it also could spark a backlash from interest groups trying to track their state budget priorities.

“We are in a very difficult situation fiscally,” Office of Policy and Management Secretary Benjamin Barnes, Malloy’s budget chief, said last week. “The economy has left us $560 million short” next fiscal year, a gap that represents about 3 percent of annual operating costs.

Barnes briefed key lawmakers late last week on the administration’s new budget proposal. Several sources familiar with that said it would give the Executive Branch broad new discretion to decide how budgeted funds are spent within each agency.

The legislature often directs agencies to operate programs “within available appropriations.” In other words, run the program as well as possible with the funding the legislature assigns.

But what if specific line items for programs don’t exist anymore? If a department is given one large block grant — and the authority to divvy up the funding as it sees fit — then administrators, and not the legislature, would decide which programs must get by with less.

The General Assembly’s modern role in molding state government and its policies through budgeting was shaped by a dramatic confrontation in 1969 with another Democratic governor, John N. Dempsey, and the legendary Democratic state chairman, John M. Bailey.

The Democrat-controlled General Assembly voted unanimously to defy Bailey, who then played a major role in setting the legislative agenda, and override Dempsey’s veto of the Legislative Management Act, a reform measure reflecting a desire by lawmakers to be, if not a truly equal branch of government, then at least a more assertive partner.

It led to the hiring of non-partisan professional researchers and financial analysts, who allowed legislators for the first time to make budget and policy decisions independent of the executive branch.  In 1970, a constitutional amendment further strengthened the General Assembly by authorizing it to meet annually, beginning in 1971.

The revolt contributed to Dempsey’s decision not to seek re-election in 1970.

Malloy hinted after last Friday’s State Bond Commission meeting that anyone speculating on his next budget plan might want to look back on state budget developments last fall.

Legislators from both parties complained. And in special session in December, the Democratic majority restored some of the funds for hospitals and social services while requiring the administration to find alternative savings spread across most agencies. Republicans opposed that plan, arguing it didn’t curb spending enough and still left Connecticut with big deficits in the coming years.

When asked Friday whether the emergency cuts he ordered last September might offer a blueprint of where he would look for savings in his new budget, the governor responded: “It’s a start.”

Both the administration and the legislature’s nonpartisan Office of Fiscal Analysis are projecting a deficit topping $500 million in the next fiscal year. And nonpartisan analysts say a much larger shortfall, topping $1.7 billion, looms in 2017-18.

Malloy has made it clear he will rely chiefly on spending cuts to bring the next fiscal year into balance.

And even were the Democratic governor to steer clear of social services, health care and higher education, he still risks opposition from his political base.

Municipal aid represents almost one-sixth of all state spending. But Democrats are campaigning this fall on a promise to share state sales tax receipts with towns — though nearly all of that money won’t be delivered until after the election.

Some municipal leaders already have noted that the projected state deficits after the election dwarf the promised relief to towns.

And even some Democratic legislators have conceded they understand local officials skepticism that the promised funds will be delivered.

Still, Cassano also said he doesn’t want further cuts to social services and health care, and also doesn’t expect tax increases to be on the table.

Services for “the most dependent people have been cut to the bone,” he said.

Sen. Cathy Osten, a Democrat who also is first selectman of Sprague, said that, while she won’t back any cuts to promised town aid, “it’s going to be very difficult to make this budget work. We have to try to become more efficient in many different areas.”

Personnel costs and debt service together represent just under half of the budget. But debt payments typically can’t be reduced by large numbers in one year.

And state employee union leaders insist that, after granting concessions in 2009 and 2011, workers should not be expected to give again to close another shortfall.

“A rainy day fund should be used for rainy days. I don’t think it should be an excuse not to make hard decisions,” Malloy said last week. “I don’t believe it should be built into budget assumptions.”