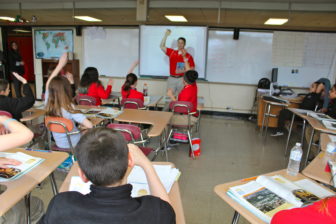 But the results of the evaluations have been shrouded in secrecy ever since, and now key supporters say the system has some serious shortcomings. On Thursday, during a meeting at the State Department of Education, officials will consider scrapping parts of the system.

Some of the evaluation program’s shortcomings  surfaced recently  when the Attorney General’s Office offered the results of evaluations from the last two years as evidence in the ongoing trial challenging the adequacy of the state’s school funding. The evaluation data were introduced as proof that the state’s chronically failing schools are overwhelmingly filled with great teachers.

The State Department of Education has denied The Connecticut Mirror’s  longstanding requests for disclosure of district-wide teacher ratings.

Data released at trial, however, show that last school year 546 teachers (1 percent of the state’s nearly 50,000 teachers) were evaluated as either “below standard” or “developing,” the two lowest ratings. Nearly identical results occurred in the 2013-14 school year. (See how teachers in your school district fared over the last two school years below). The vast majority received ratings of “proficient” or “exemplary.”

Sal Pascarella, the superintendent of Danbury Public Schools and co-chair of the Connecticut Urban Superintendents Association, testified this week during the trail that while the group supports the evaluation system, it thinks test scores should not be counted against teachers. His group supported linking test scores to performance evaluations back in 2012.

He also said that the ratings don’t provide a good picture of how his teachers are doing because they don’t include many teachers who resign, leave, or start work after the beginning of the school year.

“I have issues with standardized results being included,” she testified. “Standardized test scores such as [those used now] were never meant to be used” for evaluating teachers, she said. Her district — the largest and worst-poforming in the state by many accounts — received a waiver from the state allowing it to exclude test scores from use in individual teacher ratings and to only use them when considering the performance of an entire school.

She also testified about many  other obstacles that stand in the way of providing students with high-quality teachers, including large class sizes and noncompetitive salaries.

The evaluation model is also too formula driven, educators say. For example, Jacqueline Simmons, a principal at a Bridgeport grade school, said she has had to give high ratings to teachers she would have otherwise given the lowest rating to.

“Several teachers got ‘below standards,’ but after the formula input they received high marks, much to my dismay,” she testified.

Now facing calls from the state’s largest teachers’ union to replace the evaluation system with one that does not use test scores or student and parent surveys, the governor and his education commissioner have so far declined to say whether they are willing to scrap the use of test scores and surveys in the state-mandated evaluations.

The ratings system was set up to improve the profession and was heralded in 2012 as a crowning achievement of the reforms passed that year.

“We are going to have an evaluation system that actually means something,” Malloy said shortly before signing the bill to universal applause of administrators, teacher union leaders and others at the state Capitol.

Since then, however, the department has been unable to provide any research showing that the evaluation system has led to improved teachers or student outcomes or the elimination of poor teachers.

A spokeswoman for the State Department of Education said last week that the current ratings have nevertheless served a purpose.

“What the ratings from the first year of implementation tell us is that teachers and principals are engaging in meaningful, professional dialogue and setting goals for how to strengthen the education we deliver to Connecticut students,” said Abbe Smith, a spokeswoman for the agency. “This is an all-around win for Connecticut – teachers are empowered by having more of a voice in school improvement and students benefit from the increased focus on teaching and learning. The system is a work in progress and we look forward to continuing the dialogue with partners.”