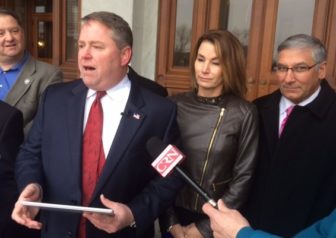 Rep. Dan Carter, R-Bethel, made a late entry Monday into the U.S. Senate race, giving Republicans an alternative to August Wolf, a businessman whose campaign to unseat Democrat Richard Blumenthal has been plagued by staff turmoil.

Carter, 48, a former Air Force C-130 pilot based in Saudia Arabia during Operation Desert Storm, entered the race with the endorsements of the legislature’s GOP minority leaders, Sen. Len Fasano of North Haven and Rep. Themis Klarides of Derby.

Fasano, Klarides and other legislators joined Carter for his announcement on the north steps of the State Capitol.

With the nominating convention next month, Carter might not be the last candidate to get into the race. Jack Orchulli, a businessman who was the Republican nominee in 2004, said Monday he still is weighing a run.

Wolf, who recently named a new campaign team, reinforced his stated intention of staying the race by announcing Monday he has contributed $100,000 to his own campaign. “I’m putting $100,000 of my retirement money into this race because it’s that important,” Wolf said. “Dick Blumenthal is a liar and he has failed Connecticut. The people of our state—both Republicans and Democrats—are angry with business as usual in Washington, D.C.”

Carter ignored Wolf and focused on Blumenthal, an attorney general and state legislator for decades before his election to the Senate in 2010.

“Sen. Dick Blumenthal has had close to 40 years to prove himself, including six in the U.S. Senate,” Carter said. He said Blumenthal’s legacy was as an anti-business attorney general who has failed to adopt a serious agenda as a U.S. senator.

“While Islamic killers terrorize western allies, Dick talks about the perils of Astro turf,” Carter said. “While real estate prices continue to crater, Dick talks about genetically altered salmon. And while Connecticut’s mass transit system needs some of our tax dollars back to repair them, Dick Blumenthal is worried about legroom on jetliners.”

Carter stood alone among the Newtown delegation — a town divided among three House districts — in voting against the gun control law passed in response to the shooting deaths of 26 students and staff at Sandy Hook Elementary in Newtown.

At the time, he said he was “deeply concerned the over-reaching nature of the bill and the constitutional implications would continue to promote the growing rift between those that own guns and those that do not, especially in the Newtown community.”

Carter voted against Democratic Gov. Dannel P. Malloy’s $1.5 billion tax increase, the repeal of the death penalty, the decriminalization of small amounts of marijuana, two minimum wage increases and a mandate on some private employers to offer paid sick days. He voted for the legalization of medical cannabis.

He unseated Democrat Jason Bartlett in 2010 in a district that covers parts of Bethel, Danbury, Newtown and Redding.

Carter did not identify his campaign manager Monday, saying he has made an offer. He will need to undertake a crash program of fundraising: Blumenthal ended 2015 with about $3.9 million in his campaign account; Wolf reported having $144,330.