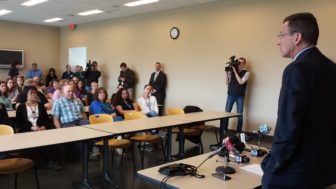 Gov. Dannel P. Malloy talks to state employees at the state Department of Public Health laboratory where tests for the Zika virus will be done.

The state budget approved by the Appropriations Committee this week would force Gov. Dannel P. Malloy’s administration to lay off 1,300 to 1,400 more workers than he was planning to serve with pink slips this month, the governor said Friday.

Facing a growing budget shortfall for the fiscal year that begins July 1, the administration has been preparing to send out layoff notices “approaching 2,000,” he told reporters Friday. The state also has 360 employee applications for retirement pending, and about 288 jobs currently are vacant, the governor said.

But the $19.1 billion budget the Democrat-controlled committee endorsed Wednesday for the 2016-17 fiscal year would require eliminating 4,000 positions, the governor said. That’s based on the committee’s recommendations to lower departmental salary accounts by a total of $239 million and a reserve account for workers’ raises by another $63 million.

“The governor is trying to have leverage with the unions, and layoffs bring people to the table,” said Bye, D-West Hartford. “In no way do I anticipate that our budget would lead to a reduction of 4,000 state employees. I think that is exaggerated.”

But, the Democratic governor told reporters after a public event in Rocky Hill, “That’s our read of it.”

“That is not a number that I am promoting. I want to be very clear, but our analysis of that document would indicate that the cuts that they have made to salary accounts are substantially greater than the ones that we had recommended,” Malloy said.

About 45,700 permanent, full-time employees are paid out of the state budget.

A spokesman for the administration’s budget office said they have not done a written analysis of the layoffs that would be needed to achieve the projected labor savings proposed by the governor or the Appropriations Committee.

Bye said that the $239 million in labor savings in the committee budget anticipates carrying forward $76 million the state already has saved for the current fiscal year through retirements and holding positions vacant. Another $33 million in personnel costs would be saved by closing a prison and closing or privatizing several state-run group homes that serve abused and neglected children and those with intellectual or developmental disabilities.

The privatization of 30 group homes run by the Department of Developmental Services is estimated to save a total of $6.2 million, including a larger savings in personnel costs that would be offset by paying private providers to run the homes.

The prison closure is forecasted to save $13.5 million in labor costs.

Bye said that leaves $130 million in labor costs that the governor would need to find. She said that number would be quickly reduced when factoring in savings by not filling positions as people retire or leave their job for various reasons.

“I expect out budget would mean closer to 1,000 layoffs. I don’t think it’s anywhere near as grave as the governor stated,” she said during an interview.

The governor’s estimate would put even more pressure on him and the General Assembly to craft a balanced budget for the upcoming fiscal year before the regular 2016 session ends on May 4.

Both the budget Malloy offered on Feb. 3 and the committee’s plan are about $340 million out of balance based solely on declining revenue projections developed by nonpartisan analysts in late February. And if the administration’s estimate of the committee’s salary reductions is correct, the committee plan faces an even larger built-in hole.

Both plans rely largely on cuts to social services, health care,and education. The committee cut somewhat less than Malloy did in these areas though, opting also to reduce spending for transportation and municipal aid.

Further complicating matters, the preliminary $20.4 billion budget Malloy and the legislature approved last June for 2016-17 is about $930 million out of balance, according to the legislature’s nonpartisan Office of Fiscal Analysis.

Administration officials say the governor will propose an updated series of revisions to the 2016-17 budget next week.

“I think we will reserve judgment until we actually have that document,” he said. “That document is being worked on, decisions are being made literally as we speak.”

When pressed on whether municipal aid reductions or additional savings from labor would be part of his updated plan, Malloy added that, “I am not here to give a preview of a document that we are going to present next week.”

Malloy’s response was brief when asked if he would be calling for additional revenue or tax increases to close the gap.

Before taking questions from the media while touring a Department of Public Health laboratory where Zika virus tests will be done, the governor told a roomful of about 50 state employees that he regrets the current fiscal situation, and that state employees are not to blame for it.

“I just want to say thank you for all the work you do,” he said.