Two state representatives’ stories about losing parents who were crossing the street were enough to thwart legislation in the state House Thursday that would have scaled back an increase in fines drivers face for failing to yield to pedestrians.

The bill, when first introduced would have increased the maximum penalty from $181 to $500. 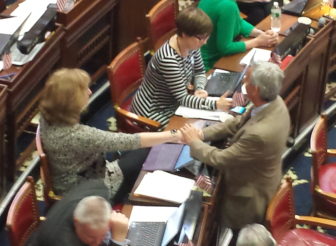 Rep. Cecilia Buck-Taylor, left, is consoled by a colleague after sharing her story.

Some legislators thought that was too much, so the leaders of the Judiciary and Transportation committees proposed an amendment increasing the penalty to $300 instead.

And then Rep. Cecilia Buck-Taylor, a Republican from New Milford, stood up to tell a story she hadn’t shared publicly.

“This bill is very personal to me,” she said. She took a deep breath and began to cry.

“A couple of months ago my mother was at a crosswalk and got hit and died. From my perspective I don’t really think that there’s a penalty too high to tell people to care, to be safe, to look out, to follow the law. So while we can look at this from all different perspectives, if you look at it from the perspective of someone whose family member has died because they didn’t take the care that they should have when they were turning around a corner, I think we have to piece that into here. I don’t think that we should have to worry about the penalty being too high because the penalty to do this can kill somebody,” she said. Her 90-year-old mother died seven weeks ago after being hit in New York City.

And then Rep. Angel Arce, D-Hartford, rose to share the story of his father, who was hit while crossing the street a few blocks from the Capitol in 2009.

“I feel your pain,” he said from across the chamber.

Hearing the stories, legislative leaders decided to withdraw the amendment and go with the steeper $500 penalty.

“I don’t think the penalty is strong enough,” he said.