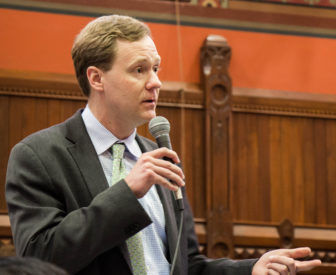 A proposal to limit non-compete clauses in physician contracts and expand the type of entities that could employ doctors – viewed by proponents as a way to protect or increase competition in health care delivery – won final passage from legislators Tuesday night.

The proposal grew out of work by the Senate’s top Democrat and Republican to address the changing health care landscape, including the trend toward doctors giving up owning their own practices to work for hospital systems or large group practices. Senate President Pro Tem Martin M. Looney, D-New Haven, and Senate Minority Leader Len Fasano, R-North Haven, have expressed concern that non-compete clauses could limit doctors’ ability to return to community practice after going to work for a hospital system, limiting patients’ access to their doctors.

Under the bill, non-compete clauses would be allowed, but could not restrict a doctor’s practice for more than one year or more than 15 miles from the primary practice site. The version that first passed the Senate would have banned non-compete clauses in cases of doctors leaving for private practice, but that provision was removed in the final version that passed both chambers Tuesday. The bill that passed the Senate also allowed for a wider distance restriction, 20 miles, but it was reduced to 15 in the final version.

Proponents of the measure characterized it as a compromise, noting that some states, including Massachusetts, ban non-compete clauses in physician employment contracts. Public Health Committee Co-Chair Rep. Matt Ritter, D-Hartford, said the committee had learned about some non-compete clauses that appeared excessive, lasting three to five years and restricting physicians from practicing within 40 or 50 miles.

Critics of the measure have said it would encroach on business practices.

During the House debate, Rep. Sam Belsito, R-Tolland, asked why the state was setting restrictions on doctors about competing. “It’s a separate business,” Belsito said. “Why would the state be doing this, and why doesn’t it just drop out and let the doctors handle it themselves?”

Ritter said there were two reasons: The state has an interest in allowing patients to get the best medical care and see doctors as quickly as they can. And the negotiations between a physician practice and a hospital involve a difference in power.

“When you have big, big industry versus small physician practices, you’ve got to do your best to even the playing field,” Ritter said.

Hospital officials have said non-compete clauses are important in protecting the investment they make to bring a doctor into practice in the state; the costs include malpractice insurance, the office and overhead, and the salary of a physician who probably won’t generate revenue for at least six months.

In addition, the bill would allow the state’s health care cabinet to study the licensure of urgent care and retail health clinics and report to legislators on whether the state should establish a licensing category for those facilities.