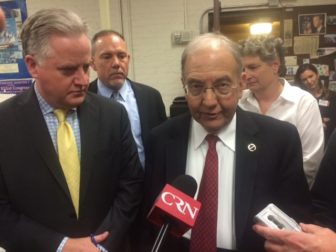 By mid-afternoon Monday, nearly six days after Democratic legislative leaders announced a tentative deal on a new state budget, full details of that agreement still hadn’t been released to rank-and-file lawmakers or to the general public.

Further confusing matters, spokesmen for the Democratic majorities in the Senate and House released somewhat inconsistent statements about the future of the compromise measure.

Meanwhile, Gov. Dannel P. Malloy’s administration, which negotiated the tentative deal for the 2016-17 fiscal year with Democratic legislative leaders, continued to urge legislators not to revise the deal.

And top Republican lawmakers said Monday they fear the delay is an attempt by Democratic leaders to mask a lack of support for the tentative deal in the House.

“We are crossing the T’s and dotting the I’s to make sure every detail is correct in the budget bill,” Gabe Rosenberg, spokesman for House Speaker J. Brendan Sharkey, D-Hamden, said at midday Monday. “It will be released when it is ready.”

Joseph would say only that the bill — and the fiscal note and policy analysis that typically accompany it — had not been filed yet with the Legislative Commissioner’s Office. This is a precursor to their release online to rank-and-file legislators and to the public.

That decision ultimately rests with caucus leadership in the Democratic majority.

But in the meantime, crucial details on the budget deal remained unavailable as of 3 p.m. Monday.

The Democratic caucuses did release a line-item-by-line-item breakdown of the deal late last week. This breakdown, which had been shared with rank-and-file legislators, also referenced $50 million in reductions to new transportation and revenue-sharing initiatives.

But without the fiscal note and policy analysis that nonpartisan staff prepare to accompany the bill, legislators and the public are missing crucial tools to understand a host of budget issues, including how the dollars in each line item are expended.

For example, simply knowing the line-item amount for the Education Cost Sharing grant doesn’t answer whether the budget: makes changes to each community’s minimum required educational expenditure, or whether magnet or charter school funding will change.

Several big questions about the budget deal remain unanswered, including:

How many of the spending reductions in the 2016-17 budget reduce costs over the long-term, and how much do they scale back a nearly $2.25 billion projected deficit in 2017-18 — the first new fiscal year after the November state elections?

How many more years is the Special Transportation Fund projected to remain in balance. Despite new funding approved last year, nonpartisan analysts warned the transportation program was headed for deficit in 2018-19. And that was before the new $50 million reduction announced as part of the tentative budget deal.

Which communities remain eligible for a new program to cap municipal property taxes? This program is funded through the new sales-tax-revenue-sharing initiative, which also faces a $50 million cut under the tentative budget deal.

Senate Minority Leader Len Fasano, R-North Haven, said he believes Democrats lacked the votes, particularly in the House, to adopt the budget in the regular session that ended last Wednesday.

And Fasano said he suspects the details are being withheld because the Democratic leadership still is uncertain it has enough support to pass the deal.

“Why do they continue not to let the public know what they are doing?” asked Fasano, who argues the tentative deal lacks sufficient long-term spending cuts to stabilize state finances over the next few years. “It’s been almost a week since this budget was put together. … This is business as usual.”