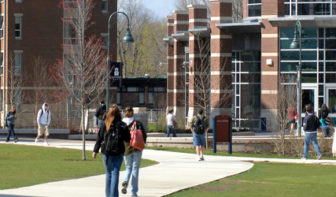 More cuts are on the way, but the governing board for the state’s community colleges and regional state universities adopted an already painful $1.2 billion budget Thursday that does not raise spending, even though the cost to provide existing programs and services will increase.

College and university presidents have described their budgets – which together closed a $32.2 million system-wide shortfall largely with tuition increases, spending cuts and the use of emergency reserves – as dire and difficult.

“We have really cut our operating budgets to the bone,” Cathryn L. Addy, president of Tunxis Community College in Farmington, told the finance committee of the system’s governing board, the Board of Regents, in May. “We are turning the lights out. We just can’t afford the staff.”  (See how the cuts impact each college and university below.)

When presenting the budget to the the board Thursday, regent William J. McGurk, who lives in Somers, said the plan “is challenging but achievable.”

But the plan is already out of balance.

That’s because the governor’s budget office last week notified every state agency of its share of $189.3 million in unassigned cuts that were included in the 2016-17 adopted state budget.

“The budget is going to continue to be a moving target,” Regents President Mark Ojakian told the governing board. “Each institution has been asked to do a 5 percent rescission option, and those are being contemplated currently.”

Leaders of the 12 community colleges, four regional universities and the online Charter Oak College have until tomorrow to submit their plans for further budget cuts.

Erika Steiner, the system’s budget chief, said during an interview she expects most of those cuts to come from further staff reductions by not filling vacant positions or tapping more into emergency reserves.

She plans to present those plans to the board in August.

The budget adopted Thursday includes a host of approaches to closing the shortfalls, from closing the pool at Southern Connecticut State University to scaling back library hours at Norwalk Community College to increasing class sizes at several schools.

“It will be challenging,” Ojakian said of the budgets. “We have to adopt to a new economic reality.”

With the legislatiure’s Office of Fiscal Analysis projecting even larger budget shortfalls for the 2018 fiscal year, which begins July 1, 2017, Ojakian said higher education is going to have to “change the way we operate.”

Here are details of each college and university’s budget proposal: