Most Connecticut health insurance plans sold through individual and small group markets will undergo steep rate hikes next year, although in some cases, the prices will not go up by as much as carriers had sought.

Nearly all of the rates for other plans will increase by double-digit percentages, including hikes ranging from 15 to 24 percent for ConnectiCare policies sold through Access Health CT, the state’s health insurance exchange. Those policies alone currently cover 47,597 people.

All of Friday’s rulings involved a total of 17 rate filings from 12 companies selling individual and small group plans to together cover approximately 300,000 people in Connecticut.

The insurance department cited several factors for the steep rise in rates, which outpace increases it allowed in recent years. Those factors include medical inflation, the expiration of federal premium stabilization payments made to insurers over the last three years as part of the Affordable Care Act, and higher than expected medical costs among customers.

“The Department conducted thorough actuarial reviews on each rate request and, as in years past, was able to reduce some of the proposed increases,” Insurance Department Commissioner Katharine L. Wade said. “However, the Connecticut market is experiencing what other states have seen this year — rising health care costs, increased demand for services and significantly higher prescription drug costs. Therefore, in some cases higher rates were actuarially justified.”

Wade added that “Under the ACA more people are covered and more are using their insurance. That increased demand for services, sunset of the federal reinsurance program and volatility in the ACA’s risk adjustment program have had a major impact on rates for next year.” 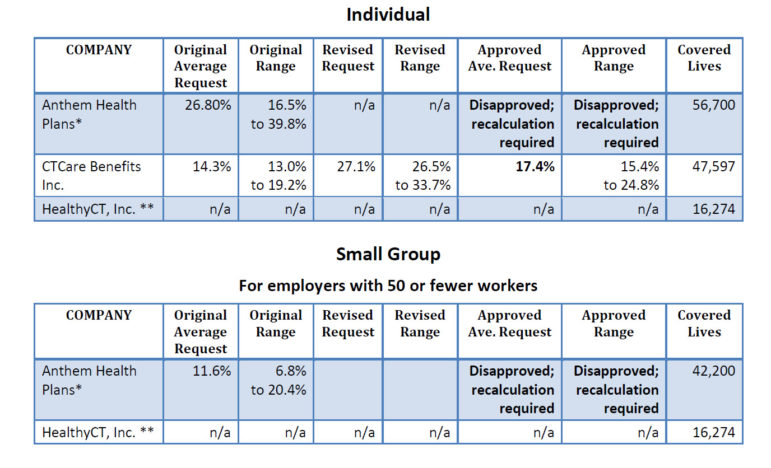 The substantial rate hikes insurance companies have sought across the country have contributed to increased questions about the future of Obamacare and criticism of the health law. The open enrollment period for people to buy plans for 2017 begins just before the November election, and opponents of the law have stepped up criticism of its impact.

The department did approve a 48.1 percent increase for ConnectiCare for an individual policy sold outside of the exchange, but it serves a relatively small number of people — just 435.

Wade deemed two rate requests from Anthem Health Plans and one from ConnectiCare Insurance Company to be excessive.

According to departmental records, Anthem’s rate hike requests overstated medical inflation trends while failing to sufficiently reflect the benefit of receiving $25 million in federal risk adjustment payments. The department also questioned Anthem’s pricing correction, which was designed to anticipate likely company costs in 2017 based on 2016 trends. 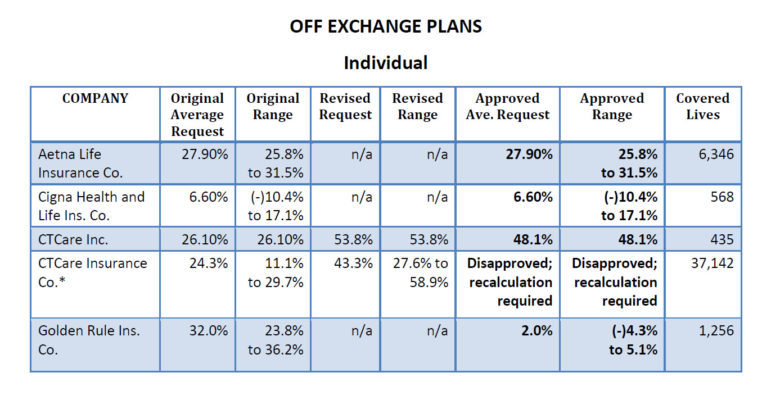 Rates for plans offered outside the health insurance exchange.

As far as the ConnectiCare request that was rejected, the department wrote in its file that while this company had to pay $26 million into the federal risk adjustment program, it overstated the impact this should have on rates.

“We are currently reviewing the department’s decision,” Anthem wrote Friday in a statement.

“ConnectiCare is still studying the Connecticut Insurance Department’s decision on our recent rate requests and evaluating what our next steps will be,” ConnectiCare wrote.

The approved rate increases will affect more than 63,800 people whose policies are sold on the state exchange, including 47,597 on individual policies and 16,274 on small group policies. Many of the people who buy on the exchange, though, will receive government subsidies and therefore won’t pay full price.

“We understand that these rates will have an impact on consumers and their household budgets and we need to continue to look for ways to address costs while focusing on quality and access,” Wade said. “We view this as an opportunity to examine benefit design and encourage the use of networks that will achieve cost savings.  Consumers need choices – abundant choices – of plans that are ACA compliant. The Department will continue to work with the governor’s office, our federal partners, Access Health CT, carriers, advocates and others to ensure that consumers have access to quality health care and more choice of plans.”

Gov. Dannel P. Malloy’s office released a letter Friday afternoon that the governor wrote to U.S. Department of Health and Human Services Secretary Sylvia Mathews Burwell urging “further action at the federal level to stabilize (health insurance) rates. To fail to act is to fail consumers in Connecticut and nationally.”

Though the rate increases approved by the state insurance department were “actuarially justified,” Malloy wrote, they were driven by the end of crucial federal aid coupled with sharply rising health care costs.

“I cannot ignore that most rates are going up, by an average of almost 25 percent for individual plans and almost 13 percent for small group plans,” Kelly said. “This is significantly more than we saw last year and these rate increases will without a doubt be a hard hit for many families.”

“It’s undeniable that some of these large increases in insurance rates will cause many low-income families to lose insurance because they simply cannot afford it,” Fasano said. “To add insult to injury, they will be hit by a penalty from the federal government because they lack the income needed to purchase a plan. We need to act now to look at ways to reduce rates.”

“It would take a corporate lobbyist to try to spin an average 25 percent (24.8 percent) approved rate increase in the individual market as a pro-consumer decision,” CCAG Executive Director Tom Swan said Friday. “By highlighting her denial of requests from two companies, and by using a three-year average, Commissioner Wade tried to mask the largest rate increase approval in Connecticut’s history.  Her rationale reads like talking points she would be writing if she was still officially lobbying for the industry.” 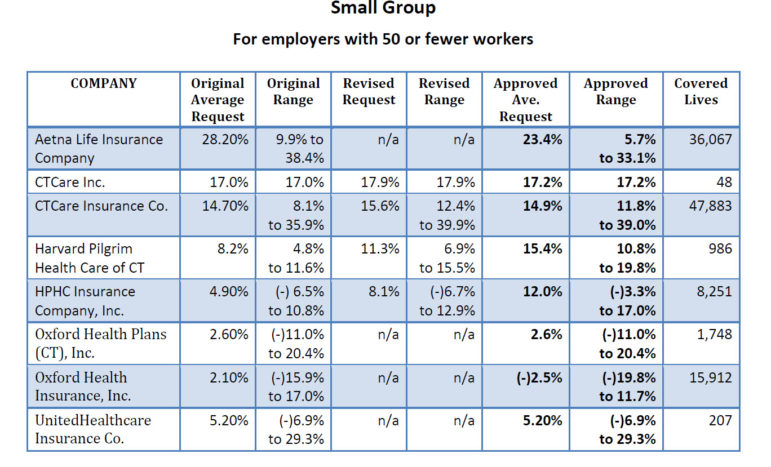 Small group rates off the exchange.