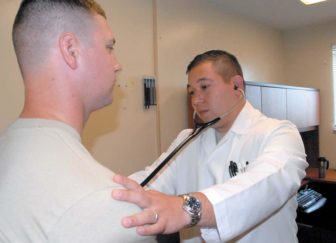 You might know where your doctor went to medical school, but does it matter if he’s a Republican or a Democrat?

A new study by Yale researchers suggests it might – at least when it comes to politically charged issues such as marijuana use, abortion or having a gun at home.

The researchers surveyed primary care physicians, presenting them with scenarios involving patients with various issues – heavy drinking, having had two abortions, riding a motorcycle without a helmet, using marijuana, or having several firearms in a home with small children. Doctors were asked to rate the seriousness of the issue in each scenario, and asked how likely they were to use “active treatment” approaches such as referring the patient to counseling.

On politically neutral issues such as obesity, alcohol or tobacco use, the doctors’ answers were similar whether they were Republicans or Democrats. But there were big differences when it came to politically charged topics.

“For patients, our study suggests that they may need to be aware of their physician’s political worldview, especially if they need medical counsel on politically sensitive issues,” Hersh and Goldenberg wrote, adding that it also suggested a need for more physician training. “Given the politicization of certain health issues, it is imperative that physicians consider how their own political views may impact their professional judgments.”

The differences on politically charged issues couldn’t be explained by the demographic traits of the doctors or their patients, although the authors noted that they couldn’t say with certainty whether the root cause was political beliefs. The results were based on how doctors answered the survey questions about what they would do, but the study didn’t measure whether the actual care doctors deliver differs.

Hersh described the study as a first step, and said it grew out of previous research that found political views can influence people’s actions in other realms, including shopping patterns and online dating. Other research has identified variations in health care based on factors including patients’ race or ethnicity, and he wondered if political views could also influence care – particularly since politically charged issues could easily come up in a medical visit.

“In a way it’s interesting, but they’ve not proven that these beliefs translate into actions,” he said.

At Quinnipiac’s medical school, dealing with biases that could affect patient care is part of students’ training, Selinger said. A class on medical ethics includes vignettes about abortion and other issues, and students discuss how they would handle them professionally and ethically – including by recognizing and disclosing any biases they have. A doctor who disapproves of medical marijuana would tell the patient he’s not the best person to discuss it with, for example.

“Physicians are expected to be very self-aware, and that’s what’s taught,” Selinger said. “If there’s a potential bias that’s going to affect the recommendation or treatment plan, you acknowledge that with the patient, and you go forward as the patient chooses to go forward or not.”

The findings didn’t surprise Dr. Robert McLean, a New Haven internist and rheumatologist, although he cautioned that it’s difficult to draw conclusions about what patients should do based on doctors’ responses to hypothetical situations.

“The truth of the matter is, we can never avoid bias,” said McLean, a member of the Board of Regents of the American College of Physicians, a professional organization for internists. But he suspects that if doctors aren’t comfortable with a topic or believe they’re likely to disagree with a patient on it, they might avoid bringing it up or try to be very neutral in their discussions.

“This is worth looking into more,” McLean said.

Hersh and Goldenberg noted that some organizations already acknowledge that doctors with different views can provide different care, citing the gay rights group Human Rights Campaign’s recommendation that patients seek referrals to gay-friendly doctors, and an online database of anti-abortion providers run by the American Association of Pro-Life Obstetricians and Gynecologists.

The study matched physician records with voter registration records from 29 states, covering thousands of doctors, and used a survey designed to avoid tipping doctors off to the idea it was about politics. Hersh and Goldenberg didn’t ask about political party, but did ask about ideology, and found that it lined up with doctors’ party in all but a handful of cases. Just over 230 primary care doctors responded to the survey.

Which political party do doctors favor?