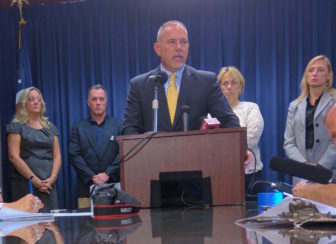 Updated at 2:57 p.m. with additional comments.

Calling it “short-sighted and irresponsible” to close at least two of the state’s vocational-technical high schools if state funding is cut, the majority leader of the state House of Representatives is calling on the governor’s office to reject a proposal made by his State Board of Education.

He and other Democratic legislators and union leaders also are proposing to strip the state education board of its authority over the 17-school system that provides a “vital pipeline of talent” for businesses.

“We are calling on the governor to support us, House Democrats. Support the business community in the state of Connecticut. Support the vo-tech schools,” House Majority Leader Joe Aresimowicz, D-Berlin, told reporters during a press conference Thursday. Aresimowicz is set to become the speaker of the House if Democrats retain their majority in November.

The press conference comes the day after the education board endorsed a proposal to close two of the state’s vocational-technical high schools and end all athletic programs at the remaining ones if the department’s budget is cut by 10 percent in the next fiscal year – an amount the governor’s budget chief has told agency leaders is “likely.”

The legislature and governor ultimately have the final say over whether the proposed closure makes it into the final state budget.

Gov. Dannel P. Malloy, a Democrat, tried to diffuse the situation at an unrelated event in New Haven. He said the proposal is very preliminary and challenged legislators to find alternatives.

“Every year I have been governor, we send a memo to departments and say, you know, tell us what you are looking for, but also give us a budget that would reflect a 5 to 10 percent in cuts – because we have to plan,” Malloy told reporters.” All the Board of Education did was to respond to how they would get to a particular percentage… We can’t be thought police. We can’t be discussion police.”

He did not take closing a school off the table.

“It’s a discussion. It’s not a plan,” Malloy said.

Aresimowicz said he is “outraged” by the proposal, and called on the administration to instead increase funding for the state-run schools, not cut it.

But with the governor’s budget office estimating a $1.2 billion deficit for the fiscal year that begins July 1, the governor has only sought proposals from state agency leaders to cut spending.

“I think everyone overreacted, quite frankly. I am anxious to see what the legislature would cut out of their budget to get to a 10 percent reduction,” said Malloy. “We’re going to have a tough budget. We are going to have to make some changes.”

Aresimowicz was unable to identify how he would pay for increased spending for the trade schools.

“It’s about priorities. And what we are here today to say is the vo-tech schools are our number one priority,” he told reporters.

It hasn’t always been that way.

Recent budgets approved by the General Assembly and signed into law by the governor have regularly cut the vocational schools. This school year, the school system had to close numerous adult education programs because of the cuts and has left many teaching and other positions vacant.

“Democrats who voted for the current year’s budget were okay cutting VoTech’s by $12.7 million in May, but a few months later they are up in arms trying to show their desire to protect the very schools they cut so deeply from. Clearly, words don’t always match action,” said Senate Minority Leader Len Fasano, R-North Haven.

Aresimowicz said that now that legislators and the business community have had a chance to feel the impact of the cuts, it’s time to reverse course.

“The more information that we are getting now about how they are being implemented and what exactly the cuts mean to the students and the programs, I think we have a clearer understanding, and it may be an “Ah hah moment’ of what those cuts actually mean, and we want to reverse them,” Aresimowicz said.

Spokespersons for Gov. Dannel P. Malloy and his budget office were noncommittal about the chances that the proposed school cuts would make it into the governor’s budget request.

“By no means has there been a decision on this. It’s just laying out potential options,” Kelly Donnelly, the governor’s spokeswoman, said during an interview Thursday.

“We’re developing the budget for the FY 2018 and FY 2019 biennium. The proposals submitted by SDE are for planning purposes only, and we will take the time to thoroughly and diligently work with the agency to determine which options will be included in the governor’s budget proposal in February,” said Chris McClure, a spokesman for the Office of Policy and Management.

“The majority party is arguing with itself over who is responsible for Connecticut getting to the point where it may have to close schools that they are championing. We are now hearing Democratic legislators tell the public that it can’t blame them for voting for a budget that very soon will be billions in deficit,’’ said Klarides, R-Derby.

This is not the first time that one of the state’s trade schools has been considered for closure. Before Malloy became governor, as mayor of Stamford, he railed against a 2009 plan to close the state-run trade school in his hometown, J.M. Wright Technical High School.

During the governor’s first year in office in 2011, Malloy proposed shifting responsibility for the 17 vocational-technical schools from the state to local school districts or regional education panels. Malloy’s proposal would have required each school to apply to the state for grants rather than have their budget requests drafted by the State Board of Education. His proposal was rejected by the legislature.

Aresimowicz said the system’s school board should have complete autonomy from the State Department of Education.

“It’s been proven that under its current structure they don’t have a seat at the table. Some could even say they have been the stepchild of the Department of Education. That needs to end,” he said.