For minority teacher recruitment panel, ‘A slap in the face’

Members of the state task force charged with boosting Connecticut’s ranks of minority teachers say they are disappointed, embarrassed and feeling disrespected by the State Department of Education for its rapid approval of a controversial teacher-training program.

Despite the panel’s request for a delay, the State Board of Education approved the controversial Relay Graduate School of Education minority teacher program before the task force could review its merits.

The approval, recommended by the state education commissioner, came in the face of strong and vocal opposition from leaders of the state’s teacher colleges and unions who questioned the Relay program’s quality and its ties to leaders of charter schools.

The Relay Graduate School of Education, which is not considered a graduate school in Connecticut since it cannot award students college degrees in the state, will fast track would-be teachers toward certification to teach in Connecticut.

On the eve of the Nov. 3 approval vote, the Senate chairman of the legislature’s Minority Teacher Recruitment Task Force and the Senate chairwoman of the legislature’s Education Committee wrote to state education Commissioner Dianna Wentzell to request her board delay action until they had time to review the merits of the program they were just hearing about for the first time.

The task force’s frustration at being ignored – and over the state board’s failure to seek outside input on the Relay application – spilled over to the task force’s meeting Nov. 10.

The Minority Teacher Recruitment Task Force at its Nov. 10 meeting.

“I wasn’t asking for it not to be approved. I was asking for us to wait so that we could answer some questions,” said Sen. Gary Winfield, D-New Haven, the leader of the minority teacher panel, and vice-chairman of the legislature’s education committee. “I am a little frustrated with what happened there and I know others are.” 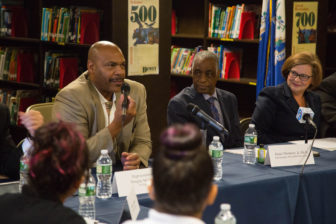 “To not even be aware of something else that’s going on by the State Department of Education or whomever,  I feel embarrassed, uninformed, and very disappointed,” he said, directing his comment at the department’s member of the task force. “Just not to know: it’s insulting because when my constituents ask me ‘Well what about this program? What’s going on with this program?’ and I couldn’t answer them, because I don’t know. I didn’t even know it was up and operating already. Nothing. I just felt disrespected by the state department.”

He then polled the panel of seven members: “How many people here knew anything about this?”

No one outside the state department answered yes.

“I think it’s a slap in the face, for all the hard work, the difficulty we have in here to do things, I wouldn’t necessarily say the right way – going through committees, doing this research, for years we get sidetracked; we can’t do this, we can’t do that, yes, no, yes. And then all of a sudden someone else comes in and says this is how we are going to do it. And this is how we are going to fix your problem,” he said.

Stephen Hernandez, the executive director of the Commission on Women, Children and Seniors, also expressed frustration.

“We have worked really hard to strike that delicate balance between increasing our teacher cadre of color while maintaining quality,” he told the panel. “What I am hearing, and what I am reflecting as well, is that when we operate in the dark about what each other is doing we undermine each other’s work toward the same goal. That’s why transparency, but intentionality and communication is so important.”

Several other state panels studying how to improve teacher preparation programs and the teaching standards also were not consulted.

Sarah Barzee, the department’s chief talent officer, responded to the complaints from the task force members by observing that for too long the rate of minority teachers in classrooms across the state has not budged and that something needed to change. The department, she said, feels the Relay Graduate School program will help.

“We have not made movement and that’s the reason for being here,” she said. “I will take back to the department the concerns that have been shared today and how we can do better going forward.”

She also pointed out that most of those who objected to the plan are white.

“There was a very clear color line between those who spoke out against and those who spoke in support,” she said. “I do think that its unfortunate that all of a sudden we do talk about quality because these are candidates of color. We believe that this is going to be a quality program.”

But Winfield and McCrory, who are both black, aren’t confident the program is high quality.

“We want alternative paths to certification, but we have to be particularly careful because the young people who aren’t being serviced the way that they should be, should be getting the highest quality teachers out of an alternative path. I am not speaking for the task force, in my particular opinion that is not what I saw happen here,” he said.

McCrory said, “It might have worked well in other states, but I don’t know because I don’t have the data. No one has given me anything to read.”

Clarification: Relay is able to issue graduate degrees in other states it operates. However, it has not been given permission to do so in Connecticut.