In gloomiest forecast yet, deficit in next budget creeps up to $1.5B 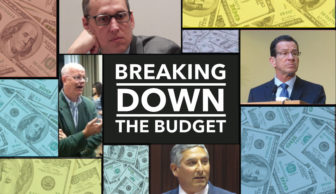 Two days after taking a partial look at the next state budget, nonpartisan analysts cast a broader gaze Thursday — and offered their gloomiest forecast of the past 12 months.

Unless adjustments are made, state finances will run nearly $1.5 billion in deficit next fiscal year and more than $1.6 billion in the red in 2018-19. Both deficits represent about 8 percent of the General Fund, which covers the bulk of annual operating costs.

The new projection from the legislature’s Office of Fiscal Analysis (OFA) came just two day after reports from OFA and from Gov. Dannel P. Malloy’s budget staff — which were prohibited from assessing potential spending growth in roughly half the budget — identified $1.1 billion to $1.3 billion in potential red ink next fiscal year.

“This report shows us what would happen if the state only funded the absolute bare-bones of our budget,” Fasano said on Tuesday. “Even this austere projection still leaves us with a budget deficit of $1.3 billion in the next fiscal year. That’s not even including things like inflation and promises the state has made to our municipalities and private providers. … This report shows the devastating truth that Connecticut can’t pay for core government services if we continue on the same path we’re on now.”

“We are questioning the methodology that ignores reality,” Klarides said. “We are witnessing the same old nonsense and denials about our finances that we have failed to confront.’’

Why the different reports just a few days apart?

In past years analysts tried to project the cost of maintaining all “current services” in the future. Those costs included:

But Tuesday’s Fiscal Accountability Act reports only looked at some, but not all, fixed costs. Specifically it looked at two of the fastest growing areas in the budget – retirement benefits and debt service – as well as Medicaid and adjudicated claims.

Malloy: Next budget will be very lean, without major tax hikesWhat cuts in the next state budget could look like…Debt costs, shrinking revenues taking big toll on next CT budget

Since last February, Malloy’s administration has argued that, with Connecticut facing tough fiscal times, legislators only should focus on two questions:

How much revenue can the state expect in future years without raising taxes?

And how much of that revenue is needed to cover contractually obligated retirement benefits, other debt costs and Medicaid expenses — all of which can’t be avoided.

Whatever is left over, the administration has said, is all the state can afford to spend on everything else.

Malloy also has argued that the “current services” reports have limited value, since legislatures routinely postpone or cancel municipal aid increases written into law, and agencies frequently must make due without inflationary adjustments to their budgets.

But Klarides and others noted that despite this stated philosophy, Malloy didn’t propose new constitutional spending cap rules that actually would have limited appropriations.

Instead he and the legislature directed analysts only to look at select “fixed costs” and not at the entire budget – but only in one report. They specifically were directed to take this approach in their Fiscal Accountability Act report, an analysis due yearly to the legislature’s budget panels on Nov. 15.

Legislators, who are free to pose questions to their fiscal analysis support staff, still could get comprehensive budget growth projections at any other time.

Klarides and others argued that all Malloy and the Democrat-controlled legislature was doing was keeping the full extent of Connecticut’s fiscal woes from being included in one high-profile public report that’s reviewed each year after the November elections.

This new report methodology didn’t even address all fiscal costs. It excluded employee wage and benefit changes mandated by contract in the coming years.