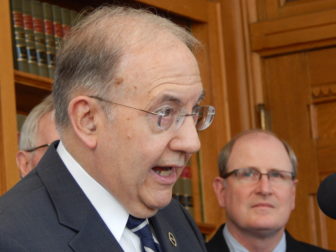 Senate President Pro Tem Martin M. Looney, D-New Haven, is to undergo a kidney transplant from a live donor next week, ending a four-month search for a kidney, but adding another element of uncertainty as to how an evenly divided Connecticut Senate will function in 2017.

Looney said Monday night he expects to be in Hartford on Jan. 4 for the opening day of the 2017 session, when Democrats will need every one of their 18 senators plus the tie-breaking vote of Lt. Gov. Nancy Wyman to re-elect Looney as president pro tem, adopt rules and make committee assignments.

Medical references indicate a recovery of three to eight weeks is the norm after a kidney transplant, and Looney intends to return after two for a series of crucial opening day votes. The 68-year-old senator said he hasn’t told his doctors yet about his plans to interrupt his recovery for a day.

“I haven’t discussed that in any detail, no,” Looney said.

If Looney is unavailable on opening day, Republicans would have an 18-17 majority in the Senate to open the session. Looney, who has been negotiating with Senate Republican Leader Len Fasano of North Haven about a degree of power sharing, said he has no understanding with Fasano as to what would happen if Looney is absent on Jan. 4.

Fasano said he and Looney are continuing to talk.

Democrats hold a 21-15 majority, but Republicans made a net gain of three seats on Nov. 8, meaning the chamber will be evenly divided for the first time in more than a century when the 2017 session convenes.

Looney said his donor is a friend, whom he declined to identify.

“It’s somebody I’ve known for a long time, a good friend,” he said.

He said 30 people volunteered to be tested as compatible donors, an outpouring that Looney called overwhelming and “very gratifying.”

His kidney damage was a consequence of anti-inflammatory drugs Looney has taken since he was a teenager for ankylosing spondylitis, a severe form of arthritis in his neck and spine. His church publicized his need for a kidney in August.

“I was astounded by the willingness of people put themselves in that position, to make that kind of sacrifice,” Looney said. “It was very, very touching.”

Looney said he got the news from the donor.

“He’s the one who actually told me himself when he finished his screening,” Looney said.

Surgery is scheduled for Dec. 20 at Yale-New Haven Hospital, where he underwent further tests Monday. He expects to be home for Christmas.

None of his family members was a compatible donor. A cousin was ruled out for his own medical issues, prompting a bit of grumbling: “He said, ‘It was the third time I was turned down by Yale, once for college and once for law school, and now they rejected my kidney.’ ”

Without a transplant, Looney said he would have needed to begin dialysis in the near future. By getting a new kidney before needing dialysis, Looney said, his doctors say his prognosis is much improved.