What ‘repeal-replace’ could mean for your employer health plan

If you’re like most Connecticut residents and get your health insurance through an employer, chances are the future of Obamacare doesn’t have nearly as much bearing on your coverage as it does for the nearly 300,000 people in the state whose coverage can be directly tied to the Affordable Care Act.

But that doesn’t mean there’s nothing at stake for you as federal lawmakers look to repeal and replace the health law.

Say you went to the doctor for a routine annual visit or got a prescription for birth control filled – and paid nothing for it. That’s probably the result of an Obamacare provision requiring health plans to cover certain preventive services at no cost to members.

‘We’re in limbo:’ For many in CT, Obamacare’s uncertain future is personal

Parents of young adults probably are well aware of another element of the Affordable Care Act, which allows those under 26 to be covered through their parents’ health plans.

Another provision of the law that applies to those with employer-sponsored coverage: Health insurance policies can’t set limits on how much they will spend covering “essential” benefits for a customer. Before Obamacare, some plans imposed annual or lifetime coverage caps that could leave people with big medical bills if they had medical conditions that cost more than their plan covered.

Experts say it’s not yet clear what will happen to those benefits; it depends on exactly how Congressional leaders and President-elect Donald J. Trump plan to dismantle the health law and what goes into any potential plan to replace it.

Some elements, like coverage of young adults through their parents’ plans, could be relatively easy to include in a replacement, experts say. And some are required under Connecticut law, although many employer-sponsored plans are not subject to state regulation and so would not be covered.

To be sure, experts say any changes are unlikely to significantly alter the employer-sponsored insurance system. They will have far more implications for people whose coverage was most affected by Obamacare – those who buy health plans on their own through the individual market, or who gained coverage through Medicaid, which Connecticut and many other states expanded eligibility for under the law.

“[If] you’ve got a generous employer plan already, you were fine in the pre-ACA world and you’re going to be fine in the post-ACA world,” said Matthew Rae, a senior health policy analyst at the Kaiser Family Foundation. “Employers offer coverage because they want to have good talent, and people demand it. In the short-term, at the very least, those people are going to be ok.”

The health law had more of an effect on people whose employers’ plans had been less generous, Rae added. 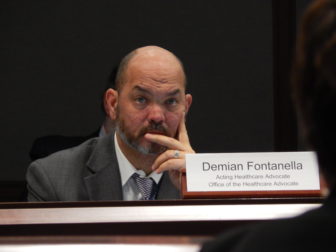 The free preventive care has been particularly helpful to people with employer-sponsored coverage, since many plans had been shifting toward requiring members to pay a larger share of the bill when getting care, said Demian Fontanella, the state’s acting healthcare advocate. “It helps for sure to increase access and lower costs for those types of services, and ensuring that there’s good robust coverage,” Fontanella said.

Many employers might end up keeping those benefits even if the law changes, predicted Brian Driscoll, regional managing principal for OneDigital Northeast, a health and benefits advisory firm.

That’s because many have come to rely on them to encourage employees “to take advantage of preventive care to promote good health and wellness overall,” he said.

Driscoll had a similar prediction for the provision allowing young adults to stay covered by their parents’ plans until they turn 26. Republican leaders have cited it as one of the pieces of Obamacare they would seek to keep.

“That’s a piece that has settled in and is probably likely here to stay,” Driscoll said.

Some provisions of the federal health law are also covered by state law. Even before Obamacare, Connecticut law allowed those under 26 to be covered under their parents’ plans. After the Affordable Care Act passed, state lawmakers added a prohibition on lifetime coverage limits to state statute.

But those requirements only apply to some employer-sponsored insurance plans in Connecticut, because self-insured plans – which are common among large employers and, increasingly, among smaller companies – are not subject to state regulation.

Obamacare also requires large employers to offer coverage or pay a penalty, but Rae said that hasn’t had a dramatic effect because nearly all employers subject to the mandate already offered coverage. Another provision that could eventually affect employers, the so-called “Cadillac tax” on costly health plans, hasn’t yet taken effect (its implementation was delayed) and was likely to face a challenge no matter who won the election, Rae said.

But Rae said there’s another way any potential changes to the health law could affect people currently covered by employer-sponsored insurance: They might need to buy coverage on their own through the individual market if they ever lose their employer coverage. Before Obamacare, insurance companies selling plans through the individual market were allowed to deny coverage to people with pre-existing conditions or charge them more for coverage.

What to look for in a replacement plan

What should people with employer-sponsored coverage be on the lookout for in any potential replacement plan?

Past Republican plans to replace the health law have called for expanded use of health savings accounts, which allow people to save money on a pre-tax basis for use on medical costs they incur if they have a health plan with a high deductible. Driscoll said there could be increases in the amount of money people can put into health savings accounts on a pre-tax basis or more flexibility in using them.

“Consumer-driven health plans and health savings accounts in particular seem to be part of the evolving playbook that the Trump administration would likely read from as they move forward,” he said.

Driscoll also will be keeping an eye on the tax status of health benefits provided by employers, which are currently not taxed. If lawmakers are looking for money to help pay for a transitional period after repealing the law, or to maintain subsidies that help people buy their own coverage, making a portion of health benefits taxable – say, above a certain dollar limit – could be one way to generate it, he said.

In addition, Driscoll predicted that more employers will move toward self-insuring their health plans, which can get them out of state-level coverage mandates and fees.