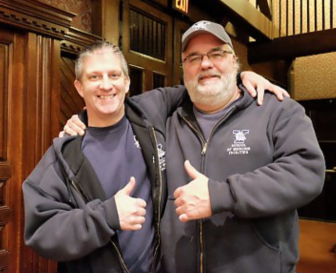 Scott Olson and John Tarka, an electrician and a carpenter at Yale Medical School, respectively

Members of UNITE HERE Local 34, which represents 3,600 Yale clerical and technical workers, filled the Shubert’s seats for a mass meeting to consider the contract worked out by their union and the Yale administration.

Up the street, members of Local 35, the blue-collar union representing 1,400 cafeteria, maintenance and physical plant workers, filled Battell Chapel. They, too, overwhelmingly voted to approve the contract in a voice vote.

Together, the two unions represent New Haven’s largest workforce – a workforce that went on strike seven times in 34 years, the last walkout occurring in 2003.

As Yale’s lead negotiator noted in a release Tuesday night, the newly ratified contract reflects a new reality in that script. The new contract expires in 2022. By that time, Yale will have gone nearly two decades without a strike. (The current contract expires at midnight Friday.)

“This is the third contract in a row achieved without conflict and is the product of extraordinary work contributed by virtually hundreds of managers and union leaders throughout the university over the past year,” stated the negotiator, Vice President of Human Resources and Administration Mike Peel.

“After 13 years of labor peace, both sides were really committed to continuing to make this work,” Local 34 President Laurie Kennington agreed in an interview. “Having a partnership is better for the city and better for members of the Yale community.”

The contract calls for 12 percent wage increases for Local 34 members over five years. It also preserves a step system that allows members to rise to higher pay grades in their first 11 years, meaning most will earn more than 12 percent raises, Kennington said.

Local 35 salaries are set to rise 14.5 percent over the five years, although the union agreed to a reduced starting rate.

The pension plan remains intact, as well — an important issue for the membership.

The union’s top priority was to prevent Yale from converting 986 clinical jobs at the medical school — medical assistants, receptionists, administrative assistants, billing assistants, clinical lab workers — into non-union jobs under the auspices of Yale-New Haven Hospital. That has emerged as an issue in recent years because it has made financial sense to convert Yale’s outpatient medical practices to the hospital, in order to obtain higher reimbursements.

The new contract guarantees that those jobs remain Local 34 jobs no matter who owns the practices, even if they’re sold, Kennington said.

The agreement “clarifies the boundaries between university jobs and those of Yale-New Haven Hospital staff, and which will enable higher standards of patient care,” Yale stated.

Elsewhere on campus, a new labor-management committee will address the job-security question when union positions become vacant and are redefined.

The contract also calls for workers to participate in screenings to catch major health problems early, or else pay a $25 weekly charge. That will “keep health care costs down in a good way,” Kennington said. The Yale release stated the contract will help slow the growth of medical expenses.

An early retirement incentive will award $1,000 for each year served to workers over 62 years old who have at least 25 years on the job.

“I’m happy that everybody stuck together to maintain one of the highest standards in the country,” Local 35 President Bob Proto said after the Battell vote. “[That] should act as an example that if the employer and organized workforce do the hard work and keep their minds open and listen to each other, then you can solve problems and maintain a good standard.” 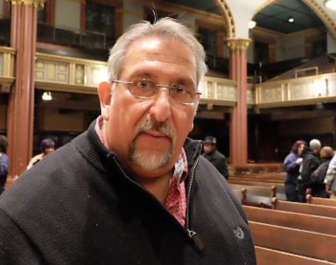 “We have 23 out of 30 allies on the Board of Aldermen, and our chief steward [Tyisha Walker] is the president of the Board of Alders in New Haven,” Proto said to applause, in remarks that were audible outside the hall. “Don’t think Yale’s not going to run somebody against that. Don’t think Yale wants us to have our hand on the steering wheel as it relates to political leverage in this town. This is New Haven. Yale is the company in New Haven. They want to have the power. Right now, we have the power.”

More applause. “And I don’t want to give it up, because we’re never going to have $25 billion in Local 35!” Proto continued, referring to Yale’s endowment. “We have votes, we have people and we have organization. And we have good leadership.”

After the vote, Gabe Esposito, a mill worker, said he voted yes because the contract was good for both sides, citing job security and the retirement incentive.

Winsome Watson, another custodial team leader, said she voted for the contract because of the health care plans as well as promises of future new union jobs — both important factors to take into consideration for her four children, some of whom are looking for jobs themselves.

Scott Olson and John Tarka, an electrician and a carpenter at the medical school, respectively, had approved of their continued job security when casting their votes.

“Yale’s a good job,” Tarka said. “Best thing is, they can’t pick up and move out of the country.”

‘I see what others are paying’

Most of the 3,200 Local 34 members attending the Shubert mass meeting left immediately after the vote, heading in all directions, pushing strollers, or running back to buses that had brought them from the Yale medical complex. A few stuck around in the theater’s warm lobby, speaking to friends and colleagues about their excitement over the contract’s ratification.

“I voted for the contract because I think it came out to be a good deal,” said Regina Williams, an accounts assistant at the medical complex who has been in her position for 20 years. “I didn’t want to strike, but I would have. I was concerned when they were trying to subcontract our jobs. I feel that we’re at peace now.”

Alicia Lakomski, a senior administrative assistant at the School of Public Health, said that she had been very concerned as well until the two sides reached a deal. Sitting on a health care committee for the union while navigating medical bills for her husband and two sons had led her to a revelation: Health care without a good contract could mean thousands of dollars more for her family — thousands of dollars that they didn’t have to spend.

Her sister, Paula Moher, said she had likewise been worried about health care as she saw her friends’ and non-unionized colleagues’ costs going up. (For Yale managerial and professional employees, who are not unionized, hospital fees are rising slightly this year.) As a relatively new employee at Yale — she has been a senior administrative assistant at the university’s Chemical Biology Institute for four years — she said she was also excited to cast her first vote.

“I see what other people are paying,” she said. “You’re talking about literally thousands of dollars. So I’m very happy with the deal we came to.”

The deal does not address the efforts of another UNITE HERE unit, Local 33, to win union recognition for graduate student teachers. The union’s petitions for recognition are currently before the National Labor Relations Board.

“We’re waiting for the NLRB to rule. We’re not done fighting,” Kennington said. Asked if she worries about the impact of future NLRB appointments by President Donald Trump, she responded: “Local 34 won recognition during the Reagan administration. We can buck the trend here in New Haven. We’re prepared to do that again.”