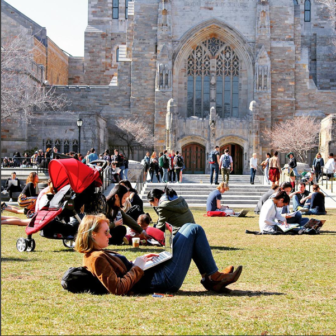 Yale’s graduate student teachers — at least those in nine departments — must have the chance to vote on whether to be represented by a union, according to an order issued by the National Labor Relations Board (NLRB).

He granted petitions by UNITE HERE Local 33 to have union representation elections held on an as-yet-undetermined date for graduate student teachers in the following departments at the university: East Asian Languages and Literature, English, Geology and Geophysics, History, History of Art, Math, Physics, Political Science, and Sociology.

At NLRB hearings in Hartford, Yale argued that any election should have to include all 50 university departments.

The ruling was the latest victory for graduate-student union organizers under NLRB appointees from the Obama administration. Local 33 filed the petitions for these elections after an Aug. 23 NLRB ruling that granted Columbia University graduate teaching assistants collective bargaining rights, meaning they can be viewed as students and workers under the law.

Yale had argued that its student-teachers were different from those at Columbia who prevailed in the Aug. 23 ruling. Walsh swatted down that argument.

A trickier question was whether a subset of a workforce can be considered a legitimate bargaining unit. UNITE HERE argued that rules differ in different departments, thus supporting the idea. Yale argued that the graduate student teacher workforce is essentially one workforce with common issues and interests.

In coming down on the union’s side, Walsh cited a 2013 case called Specialty Healthcare and Rehabilitation Center of Mobile.

Walsh noted that Yale argued that “departmental lines are blurred as a result of numerous joint appointments, combined degrees, cross-listed courses, interdisciplinary programs, and the appointment of teaching fellows to teach in departments other than the departments in which they are pursuing their degrees.”

“I continue to share the concerns of many graduate students that Local 33’s approach to these so-called departmental “micro-units” is insufficiently democratic, and contrary to the spirit of interdisciplinary collaboration that is such a hallmark of the Graduate School. Nevertheless, we assume that these nine independent elections will proceed,” Yale Graduate School Dean Lynn Cooley wrote in a letter sent Wednesday night to students and faculty.

In the letter (read it here), Cooley noted, “The University has the right to file a Request for Review with the NLRB in Washington, D.C.” She didn’t elaborate on whether Yale would actually do that. A Yale spokesman told the Independent the university would have no further comment on that question.

“We’ve been ready for our chance to vote for years and our election day is finally coming,” history grad student teacher Lindsay Zafir stated in a Local 33 release issued Wednesday evening.

Click here for a previous story detailing the arguments made on both sides at the NLRB hearings.