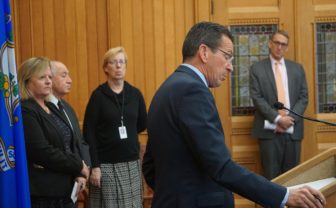 Gov. Dannel P. Malloy announces his proposed chamges in mandates on cities and towns. Around him are, from left, Betsy Gara, executive director of the Council of Small Towns; State Sens. Steve Cassano and Cathy Osten and budget director Benjamin Barnes.

The governor, who is expected next week to recommend a major realignment of aid from wealthier to poorer communities, acknowledged his plan also poses challenges for labor, business and other constituent groups.

“True partnerships are built on listening to the concerns and responding to the needs of the other party,” Malloy said. “Given the challenges we face in balancing the budget in the next biennium, the state and local municipalities must continue to strengthen our working partnership — and in some respects, begin to redefine this relationship.”

Prevailing wage and arbitration would change

The governor’s plan would change binding arbitration — a process cities and towns routinely go through each year to settle compensation for teachers, police officers, public works staff and other unionized employees.

Municipal leaders have complained that the system, which relies on three arbiters — one each chosen by management and labor and a neutral, third arbiter selected by both — has not been responsive to taxpayers’ concerns in tough fiscal times.

Those neutral arbiters, critics say, are reluctant to issue decisions that favor one side too strongly, to increase their chances of being selected again for future panels.

He also would exempt any increased state aid to cities and towns in 2017 from the arbitration review process. In other words, an arbiter could not weigh those grants when assessing a community’s ability to afford worker raises.

Currently, remodeling projects that cost more than $100,000 and new projects costing more than $400,000 must meet a competitive wage scale based on the regional market. Municipal officials say, though, that this standard generally reflects artificially inflated costs paid chiefly to unionized construction workers.

Malloy noted that the cost thresholds haven’t been adjusted in 25 years, and proposed new parameters of $500,000 for remodeling work and $1 million for new construction.

“We think that this is a great start,” said Connecticut Conference of Municipalities Executive Director Joe DeLong. “It’s a very important conversation that needs to continue in the days and weeks ahead.”

“Our smaller communities are struggling to do more with less,” said Betsy Gara, executive director of the Connecticut Council of Small Towns, who added that these communities “need the tools to be able to manage their budgets.”

But Lori Pelletier, president of the Connecticut AFL-CIO, said prevailing wage changes “are not going to save” municipal budgets, but will harm working families.

Municipalities already “play games” by splitting projects into smaller initiatives to avoid threshold levels, she said, adding that worker training, health and safety protections and other working conditions that should be part of municipal projects no longer would be commonplace.

Pelletier also criticized the other collective bargaining proposals, saying “all of this is about balancing” state and local budget issues “on the workers’ backs.”

But if local budgets are not sound, fewer municipal construction projects will be undertaken, Malloy countered, adding this would harm the economy. “I would remind folks that we are funding hundreds of millions of dollars in school projects around the state and hundreds of millions of transportation projects. …There’s a lot of work going on and quite frankly it needs to continue going on.”

The governor also would give municipalities much greater flexibility in determining how much of a burden they would place on different components of their tax base.

For example, property in most communities currently is assessed in uniform fashion, valued for tax purposes at 70 percent of market value.

The one exception is Hartford, which has special authority to impose differing assessments on residential and commercial properties.

Malloy said all communities deserve greater flexibility. Some, for example, may wish only to change how motor vehicles are assessed.

The governor acknowledged this could be a concern for the business community, and Connecticut Business and Industry Association President Joseph F. Brennan was cautious in his analysis of Malloy’s proposals.

Although Brennan praised Malloy for his suggestions to help cities and towns curb labor costs, the CBIA leader said the potential for municipalities to shift property tax burdens onto businesses is a concern.

“We need to find out more about it,” he said. “Obviously property taxes is a big issue for the business community.”

Municipal budget cap would go away

Local cities and towns also have complained loudly over the past two years since the legislature established a cap system, with financial penalties, when local spending exceeds certain limits.

The cap was supposed to complement a 2015 plan to share state sales tax receipts with cities and towns, but legislators have scaled back that revenue-sharing plan since its enactment.

Other proposals from the governor would: