On Realtors’ dime, Geno tries coaching at the Capitol 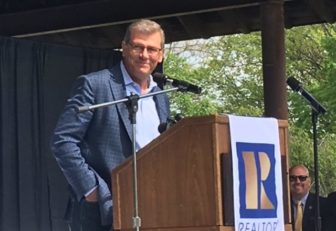 Geno Auriemma stood Tuesday on a Bushnell Park bandstand, down the hill from the State Capitol, to give a motivational speech commissioned by the Connecticut Realtors. It was unclear if his target audience was the 2,000 Realtors seated before him or the two dozen legislators on stage behind him.

He made a pitch for Connecticut to think big and long-term as it struggles with its chronic budget woes, offering snark and sympathy toward legislators, and dropping asides about his heralded women’s basketball team playing on campus in a leaky Gampel Pavilion and in Hartford at an XL Center that he called the worst venue in major collegiate sports.

“This is a little bit different for me,” said Auriemma, whose speaking fees can run $30,000 and up, according to one booking agency. “It’s kind of out of my comfort zone. It’s not what I do. The last time I talked to a Realtor, it cost me a lot of money.”

It was a little bit different for Connecticut Realtors, too. The trade association of 16,500 members, whose political action committee has $257,472 in the bank, is trying to flex its muscles at the Capitol, making a general demand for pro-growth policies in a year of fiscal crisis and unsettled politics.

“The missing factor we have is no growth here in Connecticut,” said Michael C. Barbaro, president of the group that calls itself the state’s largest trade association. “No one is coming to our state. It’s not an inviting place to do business. It’s a great place to live. We don’t need to be sold on that by legislators. We’re here. We’re vested.”

“I was lying through my teeth. I was like a bad Realtor. Or a good politician. There, did we take care of everybody here?”
Geno Auriemma

Instead of its typical low-key lobbying day — bringing a couple hundred Realtors to the Capitol for brief chats with local legislators about specific legislation — the association staged an outdoor rally headlined by Auriemma, with legislative leaders and a BBQ tent in supporting roles.

Auriemma, 63, tanned and seemingly rested after a season that ended in a Final Four overtime loss that broke a record 111-game winning streak, talked about the parochialism he found when arriving in Connecticut in 1985 to take over a losing team that played in a dingy field house on a campus that seemed little changed for decades.

He said he got the job by demanding nothing, other than a chance to win. He said he promised a nationally ranked team in four years. 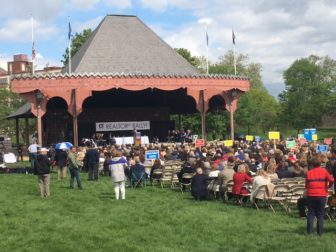 About 2,000 Realtors gathered in Bushnell Park.

“I was lying through my teeth,” Auriemma said, a grin spread across his face. “I was like a bad Realtor. Or a good politician. There, did we take care of everybody here?”

The coach, whose speaking fee was not disclosed, stepped to the microphone wearing jeans, an open-collared shirt and a sports coat. Over 20 minutes, Auriemma joked and occasionally swore, talking about life in a small state caught between Boston and New York City, whose proximity is something Connecticut real-estate agents market.

He pretended he was impressed the first time he was told Connecticut was rich, the state with highest per-capita income.

“I didn’t realize they meant the 30 guys in Fairfield, nobody else,” he said.

Auriemma said he too often finds Connecticut to be a place willing to accept what’s substandard, quickly adding that the University of Connecticut has made great strides, improving its campus and admission standards, even if the once-shiny Gampel really needs a new roof.

He glanced to his right up the hill to the Capitol.

“That’s their court. That’s the place where —“

He paused and smiled.

“ —  they play their games. That’s where they go every day to make things happen.“

“My thing, I don’t have any answers. I’m not running for anything, nor do I want to,” Auriemma said. “I just have questions. Tell me, what’s been done around here in the last 20 years that makes your job easier. How about nothing? How about nothing?”
Geno Auriemma

Auriemma said he didn’t envy lawmakers, even as he tweaked them for not always realizing part of their job is recruiting on behalf of Connecticut, creating an environment attractive to economic growth.

The Realtors applauded. So did the legislative leaders.

Auriemma warned about complacency. When he came to UConn, he said, the teams to beat were Boston College and St. John’s, a pecking order those teams seemed to think would never change. But it did.

Now, UConn is on top, a winner in every one of Auriemma’s seasons but the first. His teams have won 11 national titles, going on long undefeated runs. He says Connecticut seems to think that will last forever, too.

“You’ve been up to Gampel Pavilion lately? The roof is falling apart,” he said. “The roof is leaking. It’s just like becoming the original field house I coached in, and guess what, everybody thought, ‘It’s OK.’ Oh, really. The number one team in America is playing in a place that leaks, and the roof is falling apart? But it’s OK. We’re going to win anyway. Don’t worry about it.

“You been to the XL Center recently? It’s the worst building that we play in of any major university in America. The worst. No one else is even second. But it’s OK, because we’re going to win anyway — until when? Until we don’t. Until we don’t, and then what. Then it’s too late.” 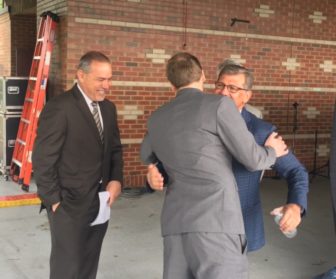 “My thing, I don’t have any answers. I’m not running for anything, nor do I want to,” Auriemma said. “I just have questions. Tell me, what’s been done around here in the last 20 years that makes your job easier. How about nothing? How about nothing?”

The Realtors applauded. One of them was Bob Duff, the Realtor in Norwalk whose other job is Senate majority leader.

The coach told his audience that members of teams share a common vision and are willing to sacrifice for a larger good.

“We live in a world right now, unfortunately, where every decision has to benefit everybody,” he said. “Well, only one thing can be the most important thing at one time.”

The legislators shook his hand. They made small talk backstage as Auriemma sipped from a bottle of water.

Auriemma said he likes to be provocative, to keep an audience slightly uncomfortable. It engages them. But he repeated backstage what he told the Realtors: For all his swagger, no one should think he pretends to have the answers to all that ails Connecticut.

“I’m not here to take sides. I don’t do for a living what they have to do,” he said of the legislators. “They have a very difficult job. They have an impossible situation, because everybody thinks, like I said, their thing is the most important thing. I have friends on both sides of the aisle, so I don’t want to take sides.