Connecticut’s top state senator said Wednesday he believes moderate Democrats are “growing increasingly comfortable” with a sales tax increase that could ease pressure to slash municipal aid and help break an impasse that has left the state without a budget.

Gov. Dannel P. Malloy reacted cautiously to the prospect of a sales tax increase, which would be only one element of a budget solution. He indicated he was more interested in hearing what combination of other revenue and spending cuts legislators intend to pursue.

“This should not be a discussion led on revenue,” Malloy said. “This is a discussion about making hard choices, and if people are ready to make hard choices — if and when they’re ready — we’re going to get a budget. And if not, it s going to be more difficult.”

He said he would veto any budget that leaned too heavily on new revenue.

Despite Looney’s view of the inevitability of a sales tax increase, three of those moderates, Sens. Joan Hartley, D-Waterbury; Paul Doyle, D-Wethersfield; and Gayle Slossberg, D-Milford, warned there was not yet a consensus that could deliver a budget for the fiscal year that began July 1. With huge municipal grant payments hanging in political limbo, House Democrats announced plans this week to hold a budget vote between Sept. 11 and 14.

House Speaker Joe Aresimowicz, D-Berlin, said he believes there is sufficient support to pass his caucus’s proposal for a new two-year budget. That plan relies on boosting the sales tax rate, though Aresimowicz said probably not as high as the 6.99 percent previously discussed, and on surcharges on restaurant and hotel transactions — to avert deep cuts and other burdens Malloy proposed for cities and towns.

The governor wants communities to pay $400 million per year to the state to help cover contributions to the teachers’ pension fund, though his administration has expressed a willingness to compromise. He also would subject nonprofit hospitals to municipal taxation, which would generate $210 million annually. But that revenue gain to towns largely would be offset by reductions Malloy proposed in various municipal grant programs.

Looney and Aresimowicz hedged on the question of how high a sales tax might be accepted by moderate Democrats in the Senate. Without offering examples, Looney said legislators were exploring expanding the base of products and services subject to the tax.

“That’s a question that remains to be answered,” he said. “We’re continuing to talk. We’re going to have another caucus next week. I think at the end of the process it will have to be part of the final budget in some way in order for us to get a budget.” 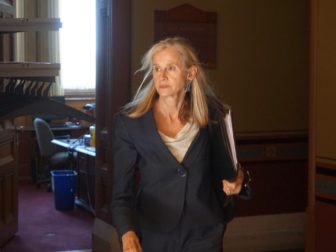 But Hartley said, “I am not growing more comfortable with the sales tax.”

The three senators agreed to support a union concessions plan that also extended the state employee unions’ benefits program from 2022 to 2027 in exchange for a pledge to make a best effort to include those reforms in the new state budget.

“The first and foremost question is the adoption of the reform plan that was put out there,” Hartley said. “Before we get to anything (else), that is pivotal.”

Some of the reforms sought by the trio would restrict in statute benefits the state could offer in future contracts. Others would end automatic cost-of-living adjustments to pensions, remove overtime earnings from pensions calculations, and restrict future benefits contracts with state employee unions to no more than four years in duration.

“We have to address the legacy issues, the long-term problems and systemic issues that have plagued us and will continue to plague us in the future unless we begin this work immediately,” Hartley added.

“I was surprised by that comment (from Looney) because we are still in caucus discussions regarding the overall budget,” Doyle said. “I still have overall concerns with any broad-based increase in the sales tax. I am hearing much opposition from my constituents to that.”

Democrats hold a narrow 79-72 edge in the House, and the 36-member Senate is split evenly along partisan lines.

Republicans already have expressed opposition to the sales tax increase and are expected to oppose the House Democratic plan.

To have any chance of passing in the Senate, it would require support from all 18 Democratic senators and also from Democratic Lt. Gov. Nancy Wyman. As Senate president, she can cast a tie-breaking 37th vote.