Senator: Someone needs to be fired over wasted $65 million plane 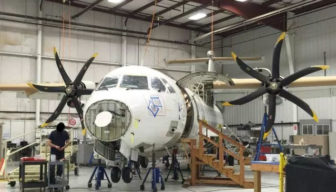 The plane that was supposed to fly counternarcotics missions resting on jacks in a warehouse in Delaware. (Courtesy of Office of the Inspector General, U.S. Department of Justice)

When it comes to Afghanistan, the Pentagon seems to have a penchant for buying planes that don’t fly.

The military “wasted” nearly $65 million on a single inoperable plane that spent years resting on jacks in a warehouse and didn’t manage even one flight in Afghanistan, the Department of Defense inspector general recently reported. The plane, tricked out with sophisticated surveillance capabilities, was supposed to fly counternarcotics missions to disrupt Afghanistan’s vast heroin operations, but languished on its perch in Delaware.

“Consequently, the DoD received no benefit for its more than seven years’ work and $64.8 million in funds wasted,” the inspector general wrote.

The debacle unfortunately has a depressingly familiar ring. In 2014, after spending $486 million on 20 planes for the Afghan Air Force — which, yes, were never able to fly — the Pentagon sold most of them as scrap metal for a whopping 6 cents a pound. The total sale was $32,000.

The $65 million counternarcotics plane was part of the “Global Discovery Program” run jointly with the Drug Enforcement Administration, and is merely the latest in a long string of failed or questionable U.S. programs in Afghanistan. (And it’s yet another example of the failed overall $8.4 billion counternarcotics effort in Afghanistan that has led to more heroin, not less. In 2016, Afghanistan grew nearly three times as much poppy as it had in 2002, according to the United Nations.) A ProPublica investigation found that as of 2015 there were at least $17 billion worth of such projects. To see what kind of projects that money could have paid for here in the U.S. — for example, the testing of the nation’s entire backlog of rape kits or ending dependency on Russia in space — check out this game:

In total, including spending by the DEA and the Pentagon, the plane actually cost taxpayers nearly $86 million, four times as much as it was supposed to cost, according to the Department of Justice inspector general, who also investigated the program. Even these numbers are shaky because the Pentagon didn’t bother to track what it was spending, the inspector general wrote. The Defense Department modified the plane with millions on whizzbang technology like electro-optical infra-red video capability. Then, when the plane was no longer needed (if it was to begin with), it had to take it all out to return the craft to its original state. In August, the government tried to auction the plane off, but there were no buyers. (The aircraft’s sad tale of being shuttered in a warehouse in Delaware and then in Texas is reminiscent of the $3 million worth of patrol boats the military purchased for Afghanistan that sat unused for years in a Naval facility in Virginia.)

Sen. Chuck Grassley, R-Iowa, has railed for years about the seemingly nonexistent Pentagon oversight on such expenditures, as well as the failure of the Pentagon to audit its books, as required by law, in more than a quarter century. Last week, Grassley, who chairs the Judiciary Committee and sits on the Budget and Finance committees, again called out the Pentagon, noting that “not a single official took responsibility” for this latest aircraft waste. “As DoD officials are passing the buck, the American taxpayers are left holding the bag once again,” Grassley wrote to Defense Secretary James Mattis. The Pentagon has not yet responded to Grassley’s letter.

If history is any precedent, Grassley won’t get far in his calls for accountability. ProPublica’s investigation found that when it came to blowing wads of cash, war zones were a consequence-free zone. (Nothing ever happened as a result of the 16 planes being scrapped for pennies.)

To Grassley this latest misadventure is an opportunity for Mattis to follow through on his July promise for better fiscal management of the behemoth Pentagon budget. “In line with your call to ‘take aggressive steps to end waste in the department,’ I ask that a DoD review be conducted to determine who is responsible for what happened,” Grassley wrote.

In a handwritten note at the bottom of his letter to Mattis, Grassley wrote that “common sense dictates” that if a Navy admiral or captain can be dismissed “because their ship rams another” — which happened recently after two fatal collisions at sea — “then these people connected with this failed plane need to be fired. If heads don’t roll nothing changes.”