It seems legislators have hopes, not a plan, for a deficit session 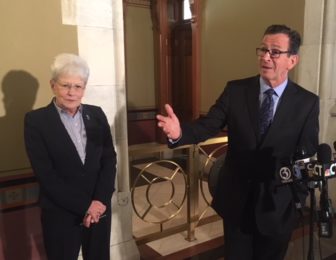 Legislative leaders left Gov. Dannel P. Malloy’s office Wednesday with the governor and Lt. Gov. Nancy Wyman believing they had just been told the General Assembly was likely to convene in special session before the New Year to tackle a $207 million deficit projected for the current-year budget.

But that’s not what the lawmakers told reporters waiting outside the office.

“We haven’t talked about special session yet,” said House Speaker Joe Aresimowicz, D-Berlin. “We’re having discussions, but there is no plan for special session at this time.”

“You may not believe me, for whatever reason,” Malloy said. Then he turned to his lieutenant governor and asked, “Nancy, what did they say?”

Wyman replied that they indicated an intention to hold a special session. (It turned out that Wyman, who presides over Senate sessions, asked specifically about their potential schedule for the rest of the year, as did the governor.)

Reached later, Senate Republican leader Len Fasano of North Haven reconciled Aresimowicz’s statement to reporters with the governor’s impression: Legislators had expressed an aspiration about tackling the budget deficit, but not a plan.

“He said, ‘Is your goal to do something before the first?’ We said, ‘We’d like to shoot for that,’” Fasano said. Of the legislators, he said, “We don’t know if we have enough commonality for a plan.”

A spokesman for Aresimowicz said the speaker agreed with Fasano’s account.

Under state law, Malloy is required to deliver a deficit mitigation plan to the legislature next month in response to a finding by Comptroller Kevin P. Lembo that the state is on pace to produce a deficit of 1 percent, the threshold for the governor to address the shortfall.

On one point Wednesday, there was no disagreement: Malloy promised to deliver a plan making the necessary cuts.

“We wont get his deficit mitigation plan until after New Year’s Day, so I can’t react to it until I see what it looks like,” Fasano told reporters. “He made it clear he’s going to balance [it], which is his obligation. He said that two or three times in the meeting, and I believe he will.”