The massacre of 17 people at a Florida high school by a teenager armed with an AR-15 cast another shadow of grief, disgust, frustration and anger over the nation last week. For Connecticut, it brought bitter remembrance of the equally horrifying killings at Sandy Hook elementary school more than five years ago.

There was grief, certainly, for the people of Newtown whose community was forever changed by an event that brought them unresolvable pain.

There was frustration and anger among Connecticut lawmakers in Washington who say no amount of bloodshed is likely to motivate a Republican-majority Congress to address the gun violence issue.

“When a plane crashes, we conduct thorough investigations to figure out what went wrong and enact regulations in an attempt to prevent the next crash,” U.S. Rep. Joe Courtney, D-2nd District, said in support of a national “red flag” law. When a class full of children is massacred in their school, apparently Congress is at a loss to do anything at all.”

And there was Gov. Dannel P. Malloy, obviously disgusted by the nation’s failure to address the problem, who witnessed first hand the Sandy Hook pain, and who predicted from that moment that, without more government action, horrors like the one at Parkland would be sure to come.

At least the Florida incident put some of Connecticut’s other issues into a better light: problems that can be addressed or ignored without the loss of human life.

Take, for instance, the state’s continuing money problems, which make it difficult to restore some $175 million in so-called “green” programs stripped from this year’s budget. At the University of Connecticut, as well, President Susan Herbst is recommending more than $3 million be raised by increasing student charges and fees to cover, among other things, eroding revenues from the state.

And while supporters are optimistic that legalizing and taxing recreational marijuana could help the state financially and in other ways, at least one legislator – notably House Speaker Joe Aresimowicz – has no faith that the state government can properly manage and maintain its transportation infrastructure. He wants it turned over to a separate authority. Municipal officials might also have their doubts about the state’s financial dependibility, having been told by administrators that without a way to stabilize Connecticut’s transportation funding, there may be a delay in the release of $30 million in road repair grants due to the cities and towns in June. 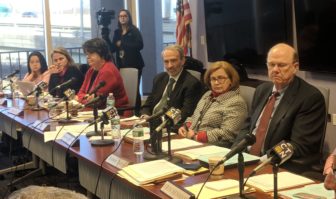 Members of the State Board of Education and the education commissioner.

At the New England Association of Schools and Colleges, officials have yet to be convinced of the merits of  the Board of Regents’ plan to save $28 million by merging 12 community colleges into one mega-school. There seemed to be no doubts among the majority of State Board of Education members that the legislature should not be directing any additional funding to certain charter schools.

Government investment in economic development has not stopped, and Friday the state’s bond commission approved funds for a long list of things, including removal of docks and mooring blocks encroaching on the U.S. Naval Submarine Base in Groton and money for some 34,000 homeowners whose foundations are crumbling because they were poured with concrete containing the mineral pyrrhotite.

The federal budget proposed by President Donald Trump would pour billions into military spending on Connecticut-built submarines and helicopters, giving a boost to the local economy; but would help pay for it by dramatic reductions in domestic programs such as food stamps, before- and after-school programs, open space preservation, public broadcasting and housing assistance.

It is getting the same cold reception from Connecticut lawmakers as Trump’s infrastructure plan, which would attempt to use state and local money to leverage $1.5 trillion in private investment.

Not everything boils down to money, of course, and there are plenty of unresolved issues that could bring, at best, inconvenience and, at worst, suffering, misery and pain. 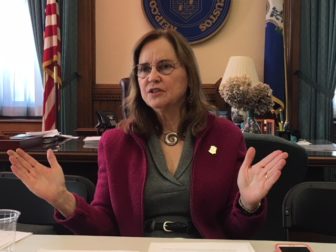 The state’s estimated 10,000 “dreamers,” many of whom attend community college here, remain in danger of deportation after the U.S. Senate’s inability to pass any of several immigration reform bills that would have given them protected status.

Connecticut Sen. Richard Blumenthal was also concerned about the widespread use of interim security clearances at the White House and the number of officials with access to classified information. His calls for protection for Special Counsel Robert Mueller’s investigation redoubled Friday after the indictment of 13 Russians on charges of interfering with the 2016 presidential election.

Secretary of the State Denise Merrill is also concerned about potential abuses of the state’s public voter registration rolls and says she wants to protect domestic violence victims and others who might be easily identified through them.