Fiscal stability plan must proceed at a slower pace

Acknowledging that legislators are unlikely this spring to enact their complete, multi-tiered plan to stabilize Connecticut’s finances, the leaders of a key state panel have agreed to pursue a piecemeal approach — for now.

But the principals of the Commission on Fiscal Stability and Economic Growth also insisted they have not abandoned their push for a more comprehensive overhaul of state finances, predicting legislators still will be pressed to act next year.

“This is not the tactic we preferred,” Robert Patricelli, a retired health care executive and one of the commission’s co-chairs, said Monday shortly after an appearance before the legislature’s Finance, Revenue and Bonding Committee. “But at this point in the session some of the proposals we offered may be too big for legislators to act on them now.”

“We still believe it would be a huge mistake to do nothing,” added former Democratic Rep. Patricia Widlitz of Guilford, the commission’s vice chair. “The legislature may not be ready to adopt the whole thing, but they need to set out now on a path forward for Connecticut.”

The 14-member commission’s March 1 report featured a wide array of recommendations centered on a major redistribution of state taxes — primarily reducing income tax rates across the board while boosting the sales and corporation levies.

Commission members have said the plan was designed to work holistically, and have urged legislatures to adopt the full blueprint and resist making major changes to the key pillars of the plan.

But lawmakers from both parties have balked at certain components. Democrats have been wary of shifting income-tax burdens chiefly onto the sales tax and consumers –noting that wealthy households would reap the largest benefit.

Republicans have cautioned against raising corporation and sales taxes and establishing electronic tolls.

Patricelli and the commission’s other co-chair, former Webster Bank CEO Jim Smith, have said the panel tried to craft a package that might pass in a sharply divided, partisan legislature.

Democrats hold a slim 80 to 71 edge in the House while the Senate is split 18-18. Unless a plan reflects concerns from both sides of the aisle, they have said, it has little chance for success.

The three chairs of the legislature’s finance committee said Monday they remain open to working with the commission to adopt a streamlined set of recommendations. 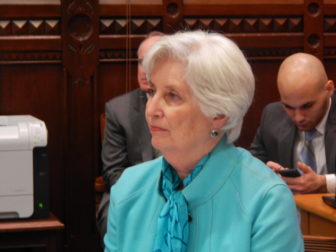 Patricia Widlitz, vice-chair of the commission.

The key, said Sen. L. Scott Frantz, R-Greenwich, is for the targeted changes to be balanced fiscally and politically.

As far as finances go, that means making sure that the cost of any tax cut is matched either by a tax increase or a spending cut.

And when it comes to politics, that means pairing ideas that, collectively, can draw support from both parties.

“As long as its balanced, I can see a streamlined plan going forward this year,” Frantz said.

Patricelli suggested that perhaps eliminating the gift and estate taxes and offsetting that revenue loss by an increase in the corporation tax was one pairing lawmakers could explore in the remaining six weeks of the 2018 session.

Rep. Jason Rojas, D-East Hartford, the finance committee’s House chairman, said neither the commission nor the legislature are at fault. The commission’s proposals are designed to address unfunded obligations amassed over decades, and lawmakers have had just over one month to assess “gigantic changes in policy.”

“I’d like to see us act on some piece of the report, but I don’t know that we can do it all this year,” he said. “But I think we can create some momentum around some of these suggestions.”

“It’s my hope” something can be enacted this year, said Sen. John Fonfara, D-Hartford, the finance committee’s other Senate chairman. “I believe good things can come together, as we saw last session, from bipartisanship.”