Her life as a foster child leads to DCF board game 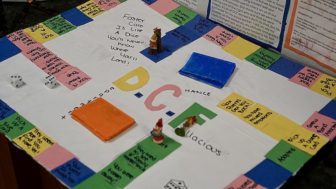 Tyla Narcisse’s Monopoly-esque board game about being a DCF foster child.

NEW HAVEN — As a foster child, Tyla Narcisse wanted the world to understand what she goes through —  so she made a board game about it.

Narcisse, 15, has been jumping from home to home since the age of 4. She decided to tackle the larger issues facing foster children like herself and study the system as part of a social justice project at High School in The Community.

She developed the board game — a take-off on Monopoly — as part of that project. She unveiled it recently as part of a two-day Social Justice Symposium held at the law-themed magnet high school — and ended up playing it with attorneys and other adults visiting the school.

Fifty-six HSC 10th-graders in all completed projects as part of a year-long assignment and unveiled the results last Wednesday and Thursday at the Water Street school.

“We live in this incredibly dynamic society,” said Building Leader Matthew Brown. “If they don’t [tackle tough conversations] while they’re in high school, when are they going to do it?”

In a room flanked by colorful trifolds on all sides, the students indeed had those tough conversations as they presented their projects Thursday. They tackled racial equality, sex trafficking, mental health, and hate speech. In some cases, the subjects were drawn from personal experience, like when Narcisse broke down how the state Department of Children and Families works.

Narcisse’s splatter-painted board had bright orange and blue letters glued to the top: “DCF.” She etched in her rendition of the acronym: “Department of Chance and Fallacious.”

“Foster care is like a game. You never know what you’re going to roll on,” explained Narcisse, pointing to her handmade Monopoly-esque board. The game has different events that foster children experience. When you roll on an orange card, it will direct the player to certain life events. “Your parents get you back!” for instance; or, “You’re taken away;” or “They weren’t able to find you a home yet.”

Or: “You get beat up by the other kids in the group home.”

Tyla Narcisse with her project.

“It’s a regular game,” continued Narcisse, “but it’s trying to put another person in foster childrens’ shoes by playing this game.”

When asked to discuss the reasoning behind the title of her board, Narcisse said that the quality of the chosen foster care is all up to “chance.” As for “fallacious?” That means the advertised quality of life “is misleading.”

While Narcisse’s personal experience with foster care has been a fortunately positive one, she has family members and friends who didn’t have the same luck, she said.

When researching for her project, Narcisse interviewed families, friends, DCF workers, on top of drawing from her own experience. When she took her research to the internet, she was struck by how “negative stuff continued to pop up.” She learned about how others are treated in foster homes and the collective adversity foster children face after reaching 18 in finding homes, jobs, and families post-care.

In a year-long research project that started in September, these students all were required to choose social justice related topics of interest.

Emma Bender, 15, suffers from different chronic health conditions. She decided to commit a year of research to uncovering different arguments for the U.S. switching to a universal healthcare system.

“I originally thought, ‘Why are we even arguing about this?’” she said. She said she thought it was the obvious right choice. After taking her research online, she found persuasive arguments as well from people “adamantly against” a universal system.

“It kind of shocked me, but I learned that everyone has their own opinion,” she said.

Like Narcisse and Bender, the 54 other HSC students produced their own boards, research papers, and presentations on their topic of choice. Whether it was abortion, human trafficking, or racial injustice, these students completed their sophomore year better equipped with the knowledge and inspiration to make the world a better place.

“We are the future,” said one passionate student in the group conversation. “We might as well do something.”

This story was originally published June 1, 2018, in the New Haven Independent.