Some days, the inflammation and pain from rheumatoid arthritis makes it almost impossible for Tracy Braun  to even sit up.

These flareups have occurred since Braun, now 50,  was in her 20s. The debilitating disease forced the self-described “go-getter” to quit work as a human resources executive in Manhattan and apply for Medicare disability benefits.

“Sometimes I can’t even get up on my own,” said Braun, who is single and lives in Cheshire.

There are medicines that can help Braun, but for years she’s been unable to afford the most effective ones, relying instead on less expensive medications that should not be taken long-term.

“Medicines cost too much,” Braun said. “I just think there should be some regulations on how much the pharmaceuticals make.”

Braun is not alone. Millions of Americans are struggling to afford the medications they need, but efforts to bring down the cost of prescription drugs have been stymied by the efforts of special interests, which lobby against any real reform.

The problem has been well documented. The amount of money people spend on prescription drugs has nearly doubled over the past three decades as pharmaceutical sales and profit margins have ballooned, according to a Government Accountability Office report.

Meanwhile, the prices of the 20 most commonly prescribed brand-name drugs for seniors have risen nearly 10 times more than the annual rate of inflation over the past five years, according to a recently released congressional report. 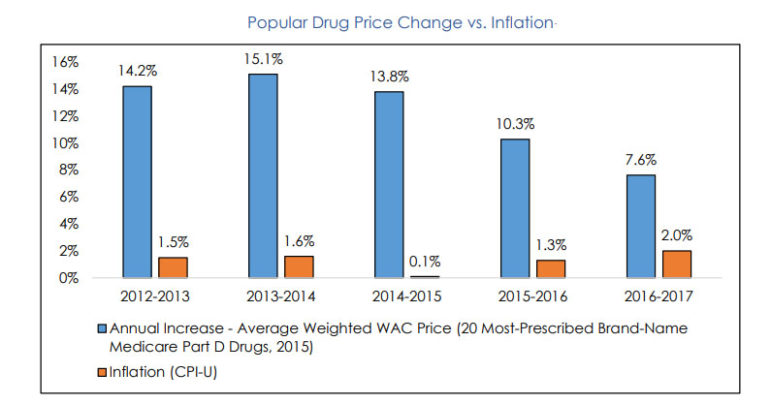 President Donald Trump on Monday lashed out at Pfizer for recently raising the price of about 100 of its most popular drugs.

“Pfizer & others should be ashamed that they have raised drug prices for no reason,” Trump tweeted. “They are merely taking advantage of the poor & others unable to defend themselves, while at the same time giving bargain basement prices to other countries in Europe & elsewhere. We will respond!”

The president in May unveiled a proposal that he said would make medicine more affordable.

Connecticut has also taken action, approving a law this year to bring prices down in the state. But health care advocates say much more must be done.  And that will be difficult, even with White House support, because of the political clout of interests that are fighting to keep the status quo.

The pharmaceutical industry argues that it prices its drugs fairly to cover the cost of research. They also say medicines are expensive because pharmacy benefit managers,  who manage drug benefits for insurers and receive rebates of at least 30 percent for medicines that treat a number of chronic conditions — including diabetes, asthma, hepatitis C and high cholesterol —  do not share their discounts with patients.

Since she could not afford more expensive, more effective drugs, for 20 years Braun took increasingly large doses of prednisone to fight her rheumatoid arthritis, a steroid that should not be taken for long periods of time. 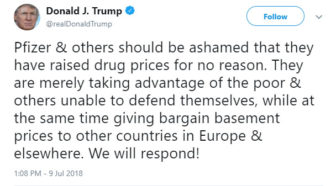 At one point, she was prescribed a new, cutting-edge drug that is a biologic — medicine sometimes manufactured in a living system such as a plant or animal cell and often dispensed in a hospital or doctor’s office.  The first dose was free. But the second required a $950 co-payment.

“I had to immediately stop it,” Braun said.

Then Braun was prescribed leflunomide, known as Arava under its brand name. That drug had a $100 co-pay, too much for her budget.

More recently, she was prescribed Actemra, only to find it had a $600 co-pay.

Luckily, Braun qualified for a program that Actemra’s manufacturer, Genentech, offered to patients who are uninsured or underinsured, that helps pay for their out-of-pocket costs to buy the drug.

Braun’s doctor, Robert McLean, said not all of his patients are so lucky.

A New Haven-based internist and rheumatologist, McLean sees patients every day who struggle to afford the medicine they need.

And it’s not just folks with rheumatoid arthritis who are having trouble, said McLean, who is also the president-elect of the American College of Physicians.

People with diabetes, heart problems and other common chronic diseases are not able to buy the medicine they need, he said.

“Why are medicines that are lifesavers unaffordable, even for people who have insurance?” he asked.

The reasons are complicated, making solutions to the problem elusive. 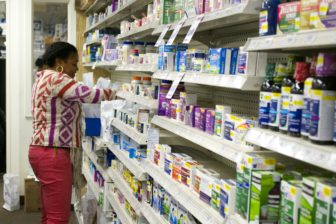 A new state law requires drug companies, health insurers and pharmacy benefit managers to disclose a wide range of information to the state.

Under the new law, drug companies will have to justify increases when a drug’s price jumps more than 20 percent in one year, or 50 percent over three years, to the new Office of Health Strategy. The law also requires drug companies to disclose information about drugs going through the U.S. Food and Drug Administration’s approval pipeline, including when the drug will enter the market.

“It’s a pretty progressive bill compared to what other states were able to do,” said McLean. “It really has a lot of transparency and public reporting.”

With little or nothing done about increasing drug prices in Washington, D.C., other states have taken the initiative to tackle the problem, too.

Those include California, Maryland, Vermont and Nevada, which requires the producers of essential diabetes drugs to disclose how much profit they make from the drugs, the cost of research that went into the drug, and how much money pharmacy benefit managers are making from the drug.

The industry has pushed back in court against some of these new state laws, including the one in Nevada. But the Pharmaceutical Researchers and Manufacturers of America, or PhRMA, the drug industry’ main trade group and lobbying arm, and the Biotechnology Innovation Organization dropped their suit this week after Nevada adopted a new regulation that will keep the drug manufacturer’s information from public view.

Some of Trump’s ideas need congressional approval. The administration is moving slowly on the others.

Critics say Trump fell short of proposing the one thing that could really help — allowing Medicare to negotiate the price of the drugs it buys for older people.

“Every other country negotiates. We are not using our negotiating power,” said Jill Zorn, senior policy officer at the Universal Health Care Foundation of Connecticut.

Zorn said health care advocates “have a lot of questions” about the effectiveness of Trump’s plan.

“The president’s proposal is, at best, a very inadequate, partial remedy,” said Sen. Richard Blumenthal, who called the high cost of drugs “the most significant and egregious failing in our health care system.”

The pharmaceutical industry panned it.

“These far-reaching proposals could fundamentally change how patients access medicines and realign incentives across the entire prescription drug supply chain,” said PhRMA president and CEO Stephen J. Ubl. “While some of these proposals could help make medicines more affordable for patients, others would disrupt coverage and limit patients’ access to innovative treatments.”

Blumenthal says a “combination of profiteering” by the drug companies and the system of rebates and rewards to middlemen — mainly the pharmacy benefits managers — are to blame.

“We share the administration’s goal of reducing drug prices,” said  Pharmaceutical Care Management Association President Mark Merritt at a recent congressional hearing. “The easiest way to lower costs would be for drug companies to lower their prices.”

Congressional lawmakers,  including Blumenthal, have introduced legislation aimed at tackling the escalation in the cost of prescription drugs. But most of the legislation has stalled in a GOP-led Congress.

Bills sponsored by Blumenthal include the “Price Gouging Act of 2017,” which would levy an excise tax – ranging from 50 to 100 percent of the profits from the price spike – on companies that raise the price of their drugs higher than the increase in the medical care consumer price index.

Another bill, called the “Affordable and Safe Prescription Drug Importation Act of 2017,” would allow wholesalers, pharmacies, and individuals to import drugs from Canada, where name brand drugs sell for much less than in the United States. After two years, importation from other countries with safety standards comparable to the U.S. would be allowed.

Other bills would allow Medicare to negotiate drug prices, allow for lower-cost generics to be brought to market more quickly and, as the Trump administration is considering, require pharmaceutical companies to disclose the price of their drugs in advertisements.

by Mark Pazniokas, Gregory B. Hladky and Jenna Carlesso

Connecticut will need 4,000 ventilators when COVID-19 peaks later this month. It currently has only 1,100.

The latest tallies Friday -- an additional 1,000 cases -- underscored the speed and severity of the pandemic.

CT enrollment in food stamps soars, but there’s a wait for benefits

As of Monday, applications in Connecticut for food stamps have more than tripled --from 147 to 453 a day.