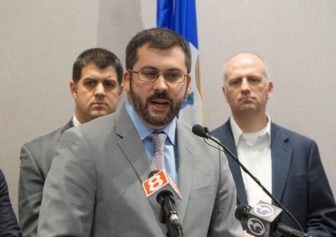 Progressive Democrats in the state House of Representatives made an early effort Thursday to shape the 2019 legislative agenda of the Connecticut General Assembly, naming a $15 minimum wage, paid family and medical leave, and the legalization of recreational marijuana as their priorities.

None of the issues are contrary to positions held by the governor-elect, Ned Lamont, and all are squarely in the mainstream of Democratic politics after a 2018 election that saw Democrats win a race for governor, expand their House majority and regain unambiguous control of the Senate when lawmakers begin their new terms on Jan. 9.

“I don’t think they are necessarily slam dunks,” said Rep. James Albis, D-East Haven, who is co-chair of 46-member Progressive Caucus. “We will have some challenges in some form or another. But they are issues that, quite frankly, the public supports. We want to make sure the people know we are listening, their government is listening.”

The minimum-wage legislation proposed Thursday would mirror the provisions of a sweeping bill signed in July by Massachusetts Gov. Charlie Baker, a Republican. That law raised the Bay State’s minimum wage from $11 to $12 on Jan. 1 and would make further increases until reaching $15 in 2023.

The same legislation created a paid family and medical leave law that will take effect in stages, with the imposition of a 0.63 percent payroll tax in 2019 and the availability of benefits in 2021. Eligible employees will get up to 12 weeks of leave to care for a family member. The Massachusetts payroll tax will be shared by employers and employees.

Connecticut legislators said Thursday their family leave proposal is a broad concept, but they will hew to last year’s proposal — the cost of which would be borne by workers, not employers.

But House Republican leaders said there is a significant administrative cost to the state, as much as $25 million annually.  House Republican Leader Themis Klarides, R-Derby, said the House should look at using a private non-profit to run the program should it be adopted.

Her deputy, Vincent J. Candelora of North Branford, said that a high minimum wage could have unintended consequences, such depressing youth employment and jeopardizing Medicaid eligibility for the working poor.

Last month, Democrats won majorities of 23-13 in the Senate and 92-59 in the House, though the re-election of Rep. Philip Young, D-Stratford, is being challenged in court over some voters being given the wrong ballots.

Members of the Progressive Caucus will comprise half of the Democratic majority — a significant bloc, but far short of the 76 votes necessary for passage.

House Majority Leader Matt Ritter, D-Hartford, whom Albis says will be a co-sponsor of all three bills, said the only caucus that matters is the one that can deliver a majority of 76 votes. But he said the progressives’ priorities reflect a certain pragmatism.

“It does’t hurt that they have been vetted and have a lot of support,” Ritter said.

The labor-backed Working Families Organization said the priorities reflect the interests of voters.

“With that support at their backs, the Progressive Caucus is positioned strongly to fight for popular, common sense ideas that will help increase equity in our state, which consistently ranks among the worst for income inequality — issues like Paid Family & Medical Leave, a $15 minimum wage, marijuana legalization, fair taxation, and an end to the prison to deportation pipeline,” said Carlos Moreno, the state director.

While Lamont’s plan provides short-term stability, it also could leave Connecticut with challenges after the 2022 elections.