A push to end housing discrimination against ex-offenders 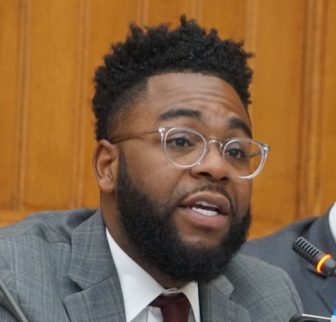 As Connecticut’s prison population shows signs of stabilizing after years of shrinking, the General Assembly and administration of Gov. Ned Lamont are tackling new ways of lowering recidivism, including a push outlined Wednesday to discourage housing authorities and other landlords from barring ex-offenders as tenants.

A working group of the legislature’s Commission on Equity and Opportunity released a 30-page report  that identifies restrictive housing policies and a lack of re-entry support as obstacles to Connecticut continuing to lower recidivism and shrink its prison population.

“Up to 95 percent of people who have been incarcerated in Connecticut will return to our communities one day,”  the report says. “Having a safe and stable place to live is essential for their successful reintegration. Research shows that if a person has stable housing, they are less likely to commit a new crime and end up back behind bars.”

Rep. Brandon McGee Jr., D-Hartford, the co-chair of the legislature’s Housing Committee, said legislation is being drafted based on the working group’s recommendations, as well as proposed directives for the state Department of Housing.

The report was released at a two-hour workshop at the State Capitol, where the participants include two new players in the state’s criminal justice reform movement: Correction Commissioner-designate Rollin Cook and Marc Pelka, the criminal-justice policy adviser to Gov. Ned Lamont.

Lamont, who was downstate, canceled a planned appearance at the workshop, but his chief of staff, Ryan Drajewicz, told the group Lamont was intent on continuing and building on the criminal justice reforms of Gov. Dannel P. Malloy, a leader in the national bipartisan movement to reassess sentencing policies that have given the U.S. the highest rate of incarceration in the world.

His hiring of Cook and Pelka, who both have reputations as reformers, is seen as evidence of Lamont’s commitment, but McGee warned that the administration ultimately will be judged on what it delivers in resources and policies.

“We’re all in on this,” said Cook, whose references include Scott Semple, the man he is succeeding as commissioner.

The workshop was Cook’s first opportunity to meet with a broad audience of community-service providers and policy makers. Cook, who comes from Utah, said he was attracted to the Connecticut job by what he sees as a commitment to progress.

Connecticut is generally credited with making great strides in making prisons more therapeutic than punitive under Malloy and Semple, who recently retired as the correction commissioner. But community-service providers complain the state still could do much better in preparing inmates for release.

Nearly 11,000 men and women were released from prison from August 2017 through July 2018, with more than 6,000 leaving though parole or some other discretionary release. They typically had some continuing help in finding housing and employment. But 4,677 served their full sentences and left prison without supervision — and in many cases, without support.

Stable housing is crucial to finding and keeping a job, and steady work is one of the best ways to keep ex-offenders from returning to crime, researchers say.

“We don’t want anyone released into homelessness,” said Sarah Diamond, a researcher. “That shouldn’t happen.”

The report concluded that Connecticut has no unified system for tracking the housing status of everyone newly released from jail or prison, particularly those individuals who are released at the end of their sentence.

The working group recommends that the state Department of Housing revise policies that discourage or even bar families getting rental or other housing assistance from welcoming home a relative after a prison term. Parole officers should no longer reject public housing or Section 8 addresses as part of a release plan.

It also recommends legislation banning property owners from looking at criminal records beyond seven years and another bill that would automatically seal all or most convictions after seven years of a person’s release from prison.

The group urges that the sex offender registry be refined to focus on those judged as a danger by a formal risk-assessment system.

“In Connecticut, our sex offender registry is not an indication of risk or danger to the community, and does not take risk assessment into account at all,” the report said.

A state recidivism study in 2017 found that within five years of leaving prison, only 4.1 percent were arrested for a new sexual offense.