Once again, it’s not easy being green

A watered-down version of the Green New Economy bill was passed by the House Tuesday.

A green new deal for Connecticut? Don’t count on it.

Elaborate plans for an ambitious one-off state incarnation of the national effort were substantially scaled back when the legislation came to the House floor on Tuesday. Lawmakers overwhelmingly backed the watered-down version, with a vote of 146-0.

As recently as a week ago, a version of the bill – renamed the Green New Economy – had been circulating. It included a goal of 100 percent renewable energy by 2050 and provisions to ensure the creation of a more robust green energy workforce, as well as increasing access to energy efficiency programs for low and moderate income customers and others with limited finances.

To ensure its passage, the game plan was to include language from a must-pass bill that amended last year’s major clean energy legislation. But when the bill was offered, most of the Green New Economy language was stripped out and the majority of the bill was dedicated to fixing last year’s problem.

That problem involved how people with solar power in particular are compensated for the excess power their panels make during certain times of the day – usually the middle of the day when the sun is strongest and people may not be home to use it.

Connecticut has used what’s known as retail rate net metering to compensate those customers. That means that solar owners are paid full retail electricity rates for any power generation they send back into the grid. Essentially they pay what they use, minus what they sell.

Nationally, as well as in Connecticut, utilities have balked at this calculation, arguing that those without solar subsidize those with it by paying higher fees for transmission and delivery.

Last year’s legislation, derived from contentious policy changes debated for more than a year before the legislation was proposed, established a process to switch from net metering to a flat tariff system to be set by Public Utilities Regulatory Commission, but it eventually became clear the time frame was too short.

The utilities themselves acknowledged it would take several years longer than the legislation stipulated to put the new system in place, while solar industry advocates have contended since last year’s legislative session that, without a fix, the solar industry in the state would stagnate.

The fix approved by the House Tuesday holds net metering for commercial solar programs in place for another two years and about an extra year for residential systems. It also authorizes what many in the environmental community have wanted for years – a study of the value of solar. 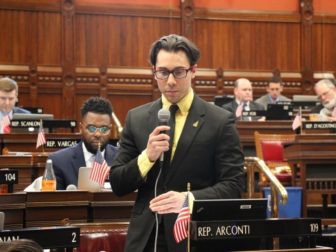 Rep. David Arconti, a proponent of the legislation.

What that would do is quantify all the other attributes solar provides, such as avoided costs and contributions to combating climate change. That information would be used to help determine a tariff rate to replace net metering.

That’s all in this legislation along with a few other minor provisions. Among them would be an increase in something known as virtual net metering. It’s a way to allow municipalities to benefit from solar and other renewable energy sources that are in a remote location. The legislation doubles the virtual net metering cap, but that cap was extremely low to begin with. Advocates argue that doubling it will make little difference. They have long called for the cap to be removed.

The measure also allows the state’s utilities to own energy storage systems for the first time. Neighboring states are already way ahead of Connecticut on storage with robust programs to incentivize what’s considered a game-changing technology for renewable energy such as solar, which is only available at certain times of day. It would allow for more robust anaerobic digestion on farms – a way for farmers to use manure and food scraps to make electricity. And it would establish an information service for so-called green jobs, though the language does not include the kind of intense workforce training and educational programs some had hoped for.

“It’s an embarrassing comedown from where we started,” said Rep. Jonathan Steinberg, D-Westport, a member of the Energy and Technology Committee, who has long advocated for more robust renewable energy commitments and programs and was a big proponent of green new deal-style legislation.

“It leaves a lot of unfinished business,” said Chris Phelps of Environment Connecticut, though he and others said the fix to last year’s legislation is critical and the bill’s few other provisions are beneficial.

Still, proponents of the measure lauded the effort, which they said would draw young adults seeking jobs in the industry. 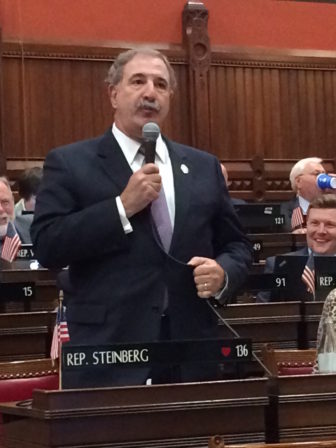 “I believe this amendment will lead to the increase of more deployment of solar energy within the state, and have a positive economic and jobs impact,” said Rep. David Arconti, D-Danbury, a co-chairman of the legislature’s Energy and Technology Committee. “We’re really looking to expand opportunities for young people. I believe young people will be attracted to states that are passing policies such as these.”

Leah Schmalz, chief program officer of Connecticut Fund for the Environment/Save the Sound, hailed the other provisions in the measure, but like others, said she had hoped for more.

“Bringing net metering back from the brink deserves applause,” said Schmalz. “We urge our legislators to continue to work toward passing other critical measures like fixing the shared solar program, promoting new electric vehicle policies, and stopping the 2019 energy efficiency funds sweep so they can finish this session with a clear climate conscience.”

Amy McLean Salls of the advocacy group Acadia Center has been working to retain net metering since the Department of Energy and Environmental Protection first began floating policy to end it more than two years ago.

She said for the state to move ahead with renewable energy like rooftop solar, good policy must be in place. “This will get us going in the right direction,” she said, noting that the committee leadership had worked very hard to craft a compromise. “I’m not thrilled – but it’s better than nothing.”